My wife and I celebrated our 37th wedding anniversary on February 14th. Sometimes I don’t even feel like I’m 37 years old let alone been married that long. We always try to get away and do something special on our anniversary. When we do get away we like to go where it is warm. Many years ago on our first anniversary we traveled to Florida and spent a few days with some friends. They lived two blocks from the Atlantic Ocean and we found we needed no other entertainment during our stay. Every morning we found ourselves on the shoreline watching the sun rise over the ocean. Then we watched the waves roll in and out, mesmerized by their beauty.

A few years later, on our fifth anniversary we traveled to San Francisco. Our travel agent found a hotel for us in the downtown district. We did a lot of sightseeing in San Francisco. We went on a bus tour of the city which included the Fishermen’s Wharf; a driveacross the Oakland Bridge, and  a stop on the Golden Gate Bridge so we could feel it sway in the wind. The Golden Gate Bridge is a fully suspended bridge. We also visited Candlestick Park and saw the Alcatraz prison made famous by Clint Eastwood in the movie, “Escape From Alcatraz.”

After spending a couple of days in the city, we decided to rent a car and drive out into wine and dairy country. I found a rental car agency a few blocks from our hotel so early one morning I left at about 7 o’clock and started walking to the agency. Along the way I took a shortcut through an alley where I noticed a backdoor to a bar was open. As I approached I could hear people talking and laughing and glasses clinking and clanking together. I stopped for a brief moment at the doorway and gazed in and saw a bar full of people drinking beer and other drinks. What struck me was it wasn’t even 8 o’clock in the morning and this establishment was full of alcohol-consuming patrons. I reasoned to myself that these must have been third shift people just getting off work and they stopped for a drink on their way home. What else could it be?

I picked up the rental car, drove back to the hotel where my wife was waiting and we headed out of the city toward Fresno and the San Joaquin Valley. We had relatives that lived out there who were California farmers. Upon our arrival, we received a grand reception and they gave us a tour of the whole agriculture industry in that region of the country. We spent time at a wine vineyard; an orange orchard; a pecan and almond farm, and several local dairies. We learned first hand what goes into each aspect of these specific industries and it gave us a renown respect for all the different types of agricultural enterprises taking place in that part of the country.

Twenty years later, for our 25th anniversary, we rented an RV, took the kids out of school, and went on a self-guided tour of the south. We spent time in Kentucky, Tennessee, Alabama, Mississippi, Florida, Georgia, South Carolina, North Carolina, and West Virginia. Out of all the places we visited on that trip, two things stuck in my mind. One was the red clay of Alabama. I marveled at how the farmers could get anything to grow in that soil. But they did – every inch of bare ground was tilled and planted to cotton or some other southern crop. The other thing that stuck in my mind was the beauty of West Virginia. As we drove through the mountains we could see in the valleys far below, serene little farms. There were a few dilapidated buildings on each homestead and a short distance away were green pastures with hereford cattle grazing on the hillsides. It looked so peaceful and so inviting. Someday I’d like to go back. 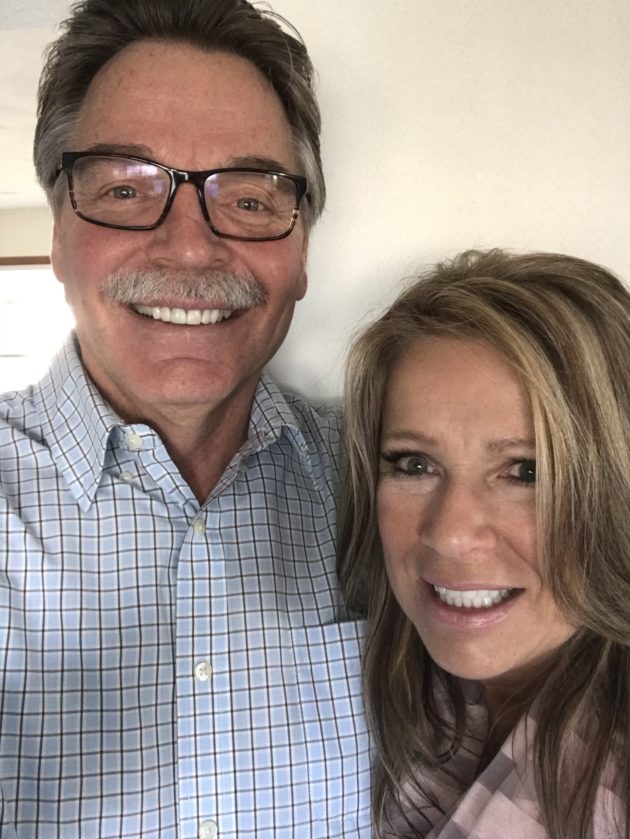 We didn’t always get away on our anniversary. Some years we were simply too busy raising our family and farming and being involved in church to get away. But we have always taken the occasion to celebrate our wedding day in one way or another. For several years there was an elderly couple in our church who would bring their camera with them on Sunday and take our picture in front of the congregation and serve cake afterward. That was always special. This year we managed to escape to Florida again (Florida is our favorite destination). We got about a foot of snow in Wisconsin a couple of days before our planned departure. Then, the evening before our early morning flight out of Chicago, the wind picked up. It blew all night long at speeds in excess of 30 mph causing the roads to drift shut and jeopardize our escape. I went to bed early that night in anticipation of getting an early start in the morning so as not to miss our flight. With the wind howling I woke up at 1 a.m., checked my phone and found a message from my brother, sent at 12:30 telling me the roads were impassable and people were stranded and abandoning their vehicles and were being picked up by snowmobiles. Oh great.

I called the airline and asked if I could change my flight. They said, “Sure, but it will cost you 245 dollars.” I said no thanks, but I wasn’t about to risk my life and go out in that kind of weather. So I called the airline a back. This time a different person answered and I told him of my dilemma and he willingly changed my ticket to a later departure at no extra cost. Funny how that works. I went back to bed. By the time the sun came up, the wind had died down, the snow plows had opened a path at least one lane wide, and we made it to Florida where my wife and I had dinner at a rooftop restaurant overlooking a courtyard below where a band was playing blues music. It was beautiful. There was no snow and I didn’t even have to wear a jacket. It wasn’t heaven, but it was pretty nice.

“This is what I have observed to be good: that it is appropriate for a person to eat, to drink and to find satisfaction in the days of life God has given them—for this is their lot,” (Ecclesiastes 5:18).