Have you noticed how dark it is in the morning just before the sun comes up?  It’s always like that this time of the year.  This has nothing to do with the time change, but everything to do with the rotation of the earth in respect to the sun and moon.  When the earth rotates around to the dark side of the moon, it’s impossible to see anything.  That piddly little flashlight on my smartphone doesn’t come close to being adequate when trying to find my way around in the dark.

When I was a kid and we had to bring the cows in for the morning milking before school, one of us would head out to the pasture, taking each step from memory because it was so dark you couldn’t even see your feet.  We didn’t have any working flashlights around because every time we had one that worked, we played with it until we either broke it, or the batteries went dead, and dad was tired of buying batteries all the time.  So we learned how to get along without one.

But getting around in the dark wasn’t easy.  There were rocks that jutted out unexpectedly.  And there were potholes filled with mud and water that we would often stumble into.  Not to mention, there was an electric wire that was attached to the perimeter fence so we couldn’t follow that by hanging onto  it.  Every now and then the smell of a skunk would trigger an all new fear.  To add to the treachery – oftentimes the cows had a bull in with them at night – but that was only if we saw a cow in heat the previous day.  We were usually safe because the bull was preoccupied with the cow. But there were times when, even though we couldn’t see the bull, we could hear his disapproving, deep throated growl warning us of his displeasure with our presence.

The journey to the ends of the pasture might as well have been to the ends of the earth.  We walked as close to the barb wire fence as we could without seeing it or touching it.  We had to stay close in case the bull came our way.  If we sensed danger we would quickly fall flat on the ground and roll under the bottom wire of the fence, which just happened to be charged (the middle and bottom wires were electric).  Sometimes we’d miscalculate and start to stand up too soon, only to have what little daylight we had in us, zapped right out.  I can think of nothing more shocking (no pun intended) than to get zapped by the electric fence when you’re least expecting it.  And every time we got shocked, we were not expecting it and words would come out that we never knew were in there.  Put all those things together and it could get pretty scary out there.  It took most of our senses just to ward off the panic. 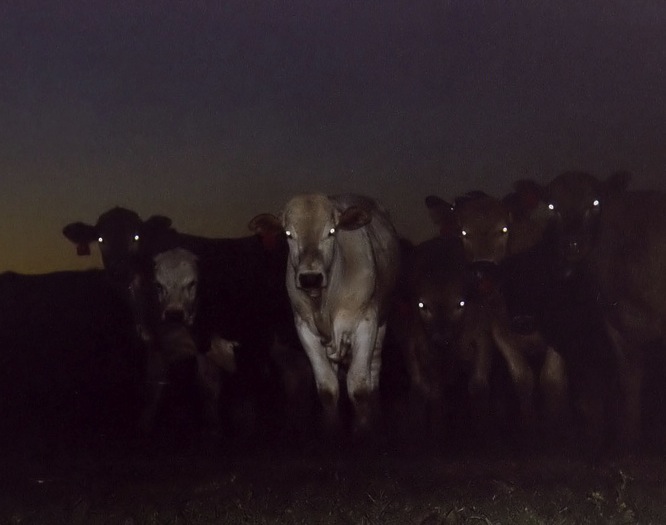 Once we got the cattle headed toward the barn, it was much less stressful. Not only were they now in front of us, but we could see the light from the barn. It didn’t help light our path, but it sure gave us security knowing we were walking toward the light instead of away from it.

We used to know an elderly lady who was pretty much totally blind.  We would visit her in her home at night and find her sitting in total darkness. She didn’t need to turn the lights on.  She could find her way around the house in the dark.  She knew exactly where everything was in every room. She would walk into a room in complete darkness and come out with the item she went to retrieve – and she didn’t have to search for it.  I remember as a child marveling at her ability to do that. But now I find myself doing the same thing, even though I’m not blind.  I purposely leave the lights off just because I don’t want to turn them on.  But now I get pamphlets from do-gooder organizations that warn against such nonsense.  I could fall and break my neck they tell me.  Night lights are a better idea.

I do have to admit that when I’m driving on Interstate 90 from Chicago to Rockford, I like all the streetlights they’ve installed.  They have the highway lit up so well, you don’t even need to use your headlights.  But of course, the police frown on that so we always turn them on. Actually, they are always on because we never turn them off “auto.”  One less thing to think about.

Which brings me to the point of this article.  Why walk around in the dark when you don’t have to when we have the Light of the world to guide us? The Bible tells us that in heaven, we won’t have to worry about darkness because “there will be no night there,” (Revelation 221:5), and “they will not need the light of a lamp or the light of the sun, for the Lord God will give them light,” (Revelation 22:5).  O happy day!