It’s all about the candy.

I’ve read in the news where some schools in California, Illinois, New Jersey, and Vermont are cancelling Halloween celebrations and parades.  Their argument is that some families don’t want to celebrate or participate.  That’s fine.  They don’t have to, but why ruin the day for everyone else? There are way too many kill joys in the world.

Halloween hasn’t changed much over the years.  It’s always been a sweet, festive, holiday, even though it’s not a real holiday.  As a kid, a real holiday meant no school.  Halloween never really counted as real in that regard, but it was the next best thing.  At school, we always had a home room party where the moms brought in all kinds of delicious treats like candy-corn decorated cupcakes and sprinkle cookies.  You can never go wrong with cupcakes and sprinkle cookies.  We’d eat all that good stuff at school and take home a big bag of candy to boot.

What has changed with Halloween, is that parents aren’t allowed to bring homemade treats to school anymore.  They have to be store bought, which is still ok, because the main thing is the treats.  It doesn’t matter who makes them, treats are treats.

After the sweet, home room party we’d put our costumes on (over our clothes), and go on parade through the high school.  The big kids and us little kids always got a kick out of that.

After school and when the chores were done, my brothers and I would put our costumes back on and mom and dad would drive us around the neighborhood trick or treating.  The town kids went door to door and took home a huge haul, which I kind of envied, but we did pretty well ourselves.  We’d hit up five or six of the neighbors who were always happy to see us.  My favorite was the neighbor who made us all ice cream cones.  He and his wife would go through the usual charade of acting like they didn’t know who we were, even though we were the only family in the area with six little boys.  After the front porch guessing game we’d be invited inside for ice cream.  This happened every year.  Anybody could give out a bite size candy bar, but this couple gave out double scoops of neopolitan Schwan’s ice cream – three flavors in one cone! 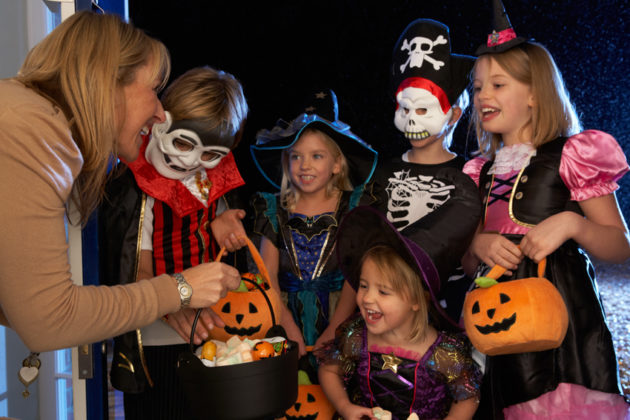 Speaking of bite size candy bars – after we got home from a night of begging candy from the neighbors we’d dump it all out on the kitchen table and each one of us would count our booty.  Then the contest began to see who could make their candy last the longest.  I know that sounds crazy, but my brothers and I would secretly compete to see who could stretch their candy the longest.  We’d each have to hide our stash to keep the others from finding it.  One time, my older brother managed to make his last until Halloween the following year.  As we were getting ready to go trick or treating that night, he came downstairs with two candy bars in his hand, proudly proclaiming that he had won the contest.  Of course, the rest of us didn’t even know the contest was still going on.  We had eaten the last of our candy a couple days after Halloween twelve months earlier.

When I was all grown up and my wife and I took our own kids trick or treating, we’d drive around to the neighbors just like I did as a kid.  It was always a barrel of fun.  By then, trick or treating in the country had become somewhat rare, and since very few people came to their door, the neighbors were always ready to give an abundance of candy to the ones who did.  And since they were expecting us, they had a whole gift package ready for the kids.  Forget the bite size candy bars, our kids got the king size ones, and lots of them, and popcorn balls, and Mountain Dew.  One dear lady, may she rest in peace, even gave mom and dad a treat.  Usually it was something off the shelf of her pantry, like canned green beans or tomatoes, but one time she gave us canned beef in Mason jars.  You’ve never tasted anything so delicious.

Now, we are the ones who look forward to the trick or treaters arriving at our door.  And after everyone has made the rounds of the neighborhood, we all gather at my folks’ place where my mom has fresh, homemade donuts and hot apple cider waiting for everyone.  It’s a neighborhood block party and then some.

Halloween doesn’t have to be about monsters and goblins and ghosts.  Around these parts, it’s about joy and giving, and gathering and celebrating.  Those people who want to cancel Halloween have never been to our neck of the woods on October 31st.

“All creatures look to you to give them their food at the proper time.  When you give it to them, they gather it up; when you open your hand, they are satisfied with good things,” (Psalm 104:27-28).