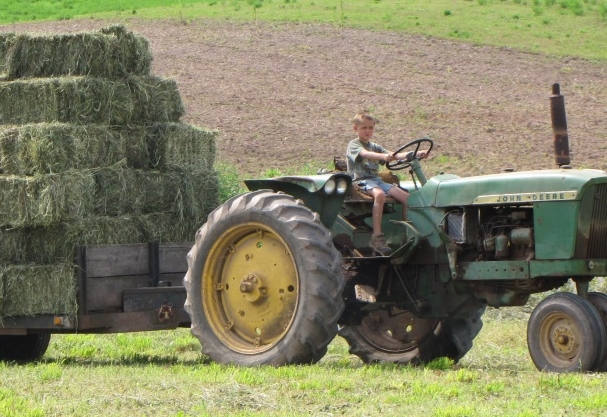 You know, being a kid was great. Being a grown up is hard work. As a kid we played some and we worked a lot. Being a farm kid meant we worked hard and we did everything the old fashioned way. I started driving a tractor when I was about six years old. I drove the baler where we went in low first as slow as we could go with just enough throttle so the plunger wouldn’t jam on the baler. I knew how to throw the lever to shut the PTO off and I knew how to push in the clutch and brake to stop the tractor. Everything else I learned by doing. The trouble is, when I got a little older and a little bigger I had to give up my tractor driving job to my little brother and I got assigned haymow duty. But it still wasn’t bad.

I remember seeing the older kids up there sweating through their shirts and me trying to work hard so I could sweat through my shirt, too. But that never happened for some reason.  Between loads, we’d do fun stuff like shoot the cows in the rear end with the BB gun and watch them flinch. We’d ride our bikes around the makeshift race track we made that went in one end of the barn, out the other, through the soupy manure in the cow lot, across the cattle guard, over the gravel pile and around the chicken house. We had more blind corners than the eye clinic had glasses.

Or, we’d get our baseball gloves out and play catch or give each other batting practice. When we made hay at my uncle’s place, as soon as we got the first round done, he got his motorcycle out of the shed and we drove it around and around and around the hay field between loads. The fun was greater than the work. I didn’t envy my little brother on the tractor so much then.

We had so much fun we hardly even noticed the work. And politics wasn’t even on the radar. The first political event I remember (and I’m not even sure you could call it political) was when Dwight Eisenhower died. I was ten years old and his funeral was on my brother’s birthday. He had a friend over that day and we were outside playing basketball when my parents called us in to watch his funeral on TV. Boring. 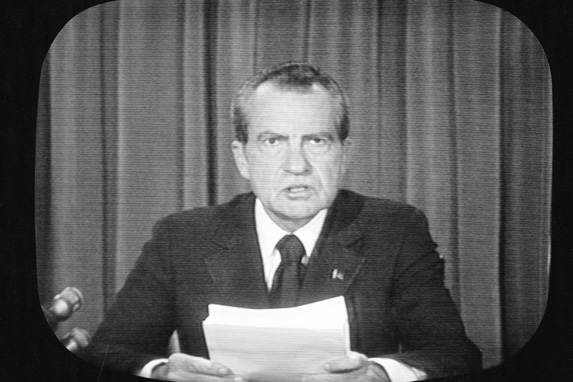 I remember a few years later watching President Nixon resign on national television and then being happy when President Ford pardoned him. I was happy because I figured that would put to rest all the Nixon controversy. Silly me. Little did I know that nothing in politics is ever put to rest. Forty six years later people still hate Richard Nixon. Now we are saturated day and night with politics. It has become an American obsession. I think I liked the world better when it wasn’t an obsession. But then again, maybe it’s always been this way, but in the innocence of my youth I was just oblivious to it. Being a responsible adult has its price.

I’ve never been more disturbed than I am now. As I write this, I’m seeing votes appear out of nowhere to change the outcome of the election. I get the back and forth and the different perceptions. It just seems dishonest to me and that really disturbs me. But life goes on. When my new granddaughter makes her appearance, she won’t know anything about it and at that moment I won’t care either.

Who does the pastor turn to when he needs encouragement? Well, sometimes you don’t turn at all, it just comes to you. A dear lady in our church sent me this: “Even when it doesn’t make sense, remind yourself of this one thing. ‘God always has a plan.’  Proverbs 16:9: ‘In his heart a man plans his course, but the Lord determines his steps.’” Amen. Those reminders are great.

Here’s another one from the lyrics of a song called “Raise A Hallelujah” by Jonathan and Mellisa Helser (Bethel Music): “I’m gonna raise a hallelujah – … Up from the ashes hope will arise. Death is defeated. My king is alive! … Everything to you Jesus we raise it all up to You.”

God is good.  (Kevin Cernek is Lead Pastor at Martintown Community Church in Martintown, Wisconsin and Assistant to the Executive Director at Fellowship of Christian Farmers International, Lexington, IL).