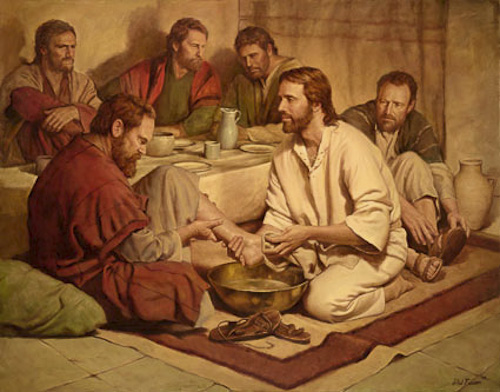 When I first heard the announcement that the theme of this year’s Day Of Prayer was “Love One Another,” I immediately became suspicious that it was a not-so-subtle prodding by the powers that be that this had political overtones and it was their way of scolding us and telling us we need to be more civil. Well, they did a good job of that, because we do need to be more civil toward our nation’s leaders and the task they have before them.

In fact, as Christians, we are to be praying for them all the time. One, because they need it.  And two, we are commanded to do so in the Scriptures.  “Pray without ceasing, give thanks in all circumstances, for this is God’s will for you in Christ Jesus,” the Apostle Paul tells us in 1 Thes. 5:16-17.  “There is no authority except that which God has established.  Do you want to be free from fear of the one in authority?  Then do what is right – for he is God’s servant to do you good,” (Romans 13:1-4).  Did you catch that?  He is God’s servant to do you good!

Now, the Apostle John, in 1 John 3:16 wrote: “This is how we know what love is:  Jesus Christ laid down his life for us.  And we ought to lay down our lives for the brethren.  If anyone has material possessions and sees his brother in need but has no pity on him, how can the love of God be in that person?  Dear children, let us not love with words or speech but with actions and in truth.”

This tells us that – once-for-all, Jesus poured out His soul unto death and laid down His life for us.  In return, because of that, we ought to be laying down our lives for each other.  Not in the same way He did for we cannot die for another, but we can live for one another.

The “laying down” here means the giving up of self-interest, (I love these little play on words) – when we lay down our lives we are actually giving them up.  It is the voluntary surrender of the right to meet our own needs in order that we might meet the needs of another.  And that type of love will manifest itself in our actions.

By the way – have you ever wondered about the verse (1 Cor 13:13) that says:  “And now these three remain: faith, hope and love.  But the greatest of these is love.”

Have you ever wondered why love is greater than faith and hope?  It is because faith and hope are for this life only.  The Bible says in 2 Corinthians 5:7:  “For we live by faith, not by sight.”  When we get to heaven, we won’t need faith anymore.  It will be fully manifested in reality.

Hope is the anticipation of things to come.  Col. 1:27:  “Christ in you, the hope of glory.”  As born again believers, it is Christ in us that gives us this great anticipation of our glorious future.  Faith, hope, and love, but the greatest of these is love.  Love will live on throughout eternity and we will be reminded of it by the nail pierced hands of our Savior.

Arthur Katz was a teacher in the public schools in Berkeley, CA. He was raised as an atheist, even though he was of Jewish descent.  Early in his life he became a Marxist, a committed Communist.  He was always a left-wing radical, a trouble maker, at the heart of every uprising that was going on.

At the close of World War II he happened to be in Germany with the American Army and personally saw the gas chambers at Dachau and Buchenwald. He came away from them shocked and sick at heart, filled with hatred, first toward the German race, and then, realizing that this was not merely a national problem but a human problem, he was filled with an all-pervading sense of disgust and loathing for the entire human race.

He went back to Berkeley and tried to give himself to education to solve his own inner turmoil, but he could not find a cure for the human dilemma.  He became more and more restless until finally he resigned his position as a teacher and went out to wander up and down the face of the earth, hardly knowing where he was going

One rainy wet day he was in Greece, hitchhiking, with a week’s growth of beard on his face, and a dirty backpack on his back, standing in the wind and the rain thumbing a ride.  Of course, no one wanted to pick him up.  He stood there for hours when at last a big Cadillac came by, and stopped.

To his amazement the man did not merely open the door and gesture for him to get in; he got out of his car, came around, and began to vigorously shake his hand and greet him and welcome him as though he were some kind of king.  He took the dirty backpack and threw it on the clean upholstery.  Then the man invited him to get in the car, and they dro

ve on. The man treated him as though he were a welcome guest.  Art Katz could not understand this.  He was taken to a hotel and the man bought him a room and cleaned him up and gave him some food.

Finally he asked him what he was doing, and where he was going.  There came pouring out of this young, Jewish atheist all the pent-up heartache, misery, and resentment of his life.  He told him the whole thing, just pouring it all out.  The man sat and listened, and when he was all through, he spoke one sentence.  He said, “You know, Art, what the world needs? The world needs those who are willing to wash one another’s feet.”  Art Katz said, “I never heard anything more beautiful than that.  Why do you say that?”  And the man said, “Because that’s what my Lord did.”

For the first time in this young atheist’s life he heard a Christian witness. That was the beginning of the end.  I do not have the space here to tell the whole story of how this young man came to know Jesus Christ.  But the thing that arrested him and broke through all the years of hatred, all the pent-up resentment and bitterness of his heart and life was one act of kindness which manifested to an apparently undeserving young man, genuine courtesy and kindness in the name of Jesus Christ.  “By this,” Jesus said, “shall all men know that you are my disciples,” (John 13:35).