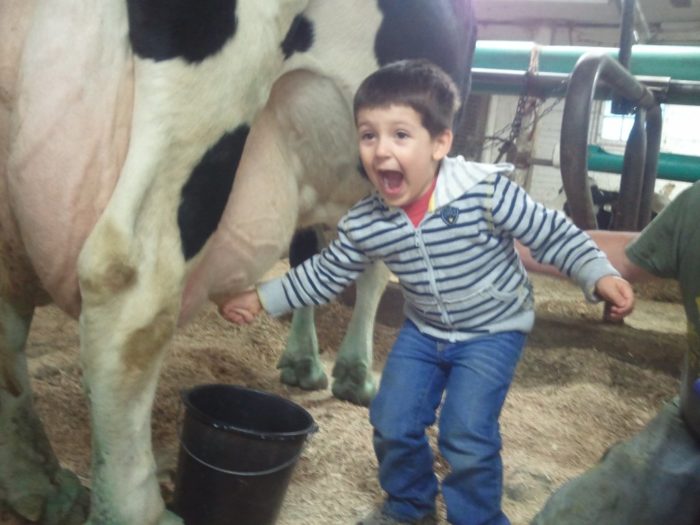 Fellowship of Christian Farmers
May 16, 2021

The first job I ever had paid $2.50 a month. I was eight years old at the time. My job was to shake the straw bedding for our 42 cows in the dairy barn. My younger brother helped me. We’d climb up into the hay mow, throw down the bales we needed then “roll” them to the place where we’d cut the twines and shake the straw. It was a big job for a couple of little kids after school everyday. We’d get off the bus, grab a snack, change clothes and head out to the barn. Dad would be in to milk at 5 o’clock so we didn’t have a lot of time to goof off.

The next job I had paid a little better but it was also more work. I got paid $5.00 a milking by the neighbor to milk his cows. That was good money but it was only for 5 or 6 days a year. He had bucket milkers so I had my job cut out hauling the milk in buckets to the cooler. I would carry the buckets out the door at the end of the barn, around the corner, and into the milk house where I’d pour the milk through a strainer and into the bulk tank. He had 33 cows so I had to hustle to keep up with three machines.

To help supplement my income, I took a job milking for another neighbor four or five days a year. He paid $8 a milking and he had a pipeline.  Between my three jobs I netted about 160 bucks a year, which was plenty for a kid who was not yet a teenager. I had money for Christmas gifts and an occasional Nestle Crunch candy bar. My grandpa paid for my pop addiction which was equal to about three bottles a year of Orange Nehi out of the machine at the grain elevator. Before I was old enough to get a driver’s license, I’d drive one of Dad’s tractors to the job site. I got a lot of satisfaction from those jobs. Not only was I helping the neighbors, making it possible for them to take a few days a year off, but I learned how other farmers did their jobs and I received compensation to boot. After I got married, I took a “real” job that paid over five bucks an hour. I was rich then.

There seems to be an all new pandemic going around these days, which has to do with work. Seems it’s easier for some and they make more money not working than getting an honest job. Recently, while in the big city my wife and I planned to eat at one of our favorite restaurants but when we got there they weren’t open. The next day when we went back, they were open. I asked the manager why they were closed the previous evening and he said it was because he couldn’t find enough help. It wasn’t that there weren’t enough people out there to work, it was that there weren’t enough people willing to work. Funny, because the Apostle Paul says, “If you don’t work, you don’t eat,” (2 Thes. 3:10). That may be more prophetic than instant.

Proverbs 14:23 says: “All hard work brings a profit, but mere talk leads only to poverty.” The writer of Proverbs assumes the place, dignity and validly of all types of work. This appreciation for work grew out of the doctrine of creation. In other words, the people worked for theological reasons. It was understood that man made in the image of God was to cooperate with God in the management and care of the earth. God had graciously subcontracted aspects of His rule and reign to man. Work was part of God’s original plan. The Garden of Eden was not an early version of a just have fun society.

Work is not a curse or a punishment. The fact is that work was ordained by God before the fall, and while the curse of God upon sin has made it harder, it did not remove the essential dignity of work. In all kinds of labor there is profit. Work is a good thing, and God is glorified by it. Work is an integral part of being what God has called us to be. We were created to be creative. Work is not a long dark tunnel that separates holidays; it is a call to join God in the subduing of the earth, and creating that which is beautiful and beneficial. We must not work as machines but as those made in the image of God. Our work should be marked by dignity and diligence.

God views all wholesome work done in His name with equal dignity. Daniel was a government bureaucrat but he is called a servant of God, (Dan. 6:20). It takes all kinds of people doing all kinds of work in all kinds of places for God’s will to be done on earth. God can be served operating a lathe at the shop, driving truck, digging ditches, teaching at the university, changing diapers, cooking meals, doing dishes at the kitchen sink or milking cows as much as standing behind the pulpit and preaching a good sermon. God calls craftsmen to serve Him as much as priests and prophets, (Exodus 31:1-11). We can worship God just as much in a pair of overalls as in a choir robe. The Bible knows nothing of a hierarchy of labor.

All Christians have one calling, but  there are many vocations. Our calling is to live for Christ and the glory of God through our everyday work.