Did you know this week is Mailbox Improvement Week? TheU.S. Postal Service is asking all homeowners to inspect and repair their mailboxes during Mailbox Improvement Week, May 12–18, 2019.  According to their website: “Repairing suburban and rural mailboxes improves the appearance of our community and makes delivering and receiving mail safer for our carriers and customers.  The Postal Service makes this annual request because of the wear and tear that occurs to mailboxes every year.” Interesting.  I’ve never considered wear and tear on my mailbox an issue. After all,  it is an inanimate object.  But of course, it does happen.

We all have mailbox horror stories.  Stories such as intentional vandalism or unintentional vehicle destruction, or snow plow wipeouts, or even usual wear and tear due to the weather.  I have more funny mailbox stories than sad ones.

When I was in high school shop class one of our projects was to construct something made from steel on which we would be graded for creativity, practicality, and the skill and quality of our welding ability.  Being more practical than creative, I chose to make a set of car ramps using heavy angle iron and diamond plated steel.  They were an awesome set of ramps, which we used on the farm for years, but they were so heavy duty it took two people to move them one at a time. Nevertheless, I passed the class.

My buddy, whose shall remain nameless, decided he was going to construct a pole about 25 feet in the air and attach a mailbox to the top of it with a sign that read, “Air Mail.”  I can still see the look of disbelief on the shop teacher’s face as my friend explained his idea to him.  Not one to squelch creativity, he approved the idea. Practicality?  That was a different story.  My friend lived along State Highway 11 and his Airmail box stood proudly for many, many years and thousands of passersby must have chuckled at that display. 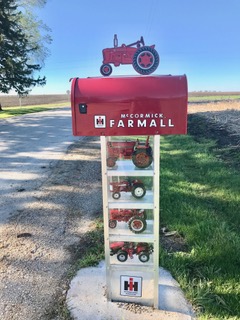 One year, my wife gave me a red tractor mailbox for my birthday.  Not only did it make an attractive mailbox, but It served as a landmark for a long time before GPS became popular.  I would simply tell people the road on which we lived and to watch for the red tractor mailbox.  No one ever got lost.  Later, as wear and tear took its toll, the door began to rust and soon there was hole in it.  It wasn’t long until a bird found it and decided to turn my mailbox into a birdhouse.  Everyday as I approached the mailbox to retrieve the mail, that bird would fly out of there.  Upon opening the door, I would find my mail covered in straw, string, grass, and other nest building debris – and also bird poop – lots and lots of bird poop.  This had to stop.  I had to get that hole in the door repaired.  The trouble is, as far as I could tell, no one sells mailbox parts.  You have to buy the whole box.  That was a dilemma for me because I wanted to keep the red tractor mailbox and the only part that needed replacing was the door.

Finally, when I could not take my little intruders annoyance any longer, I went to the hardware store and bought the cheapest mailbox they had, took it home, ground the rivets off that held the door in place, painted it red, and switched it with the one that had the hole in it.  Problem solved.

Once while driving a tractor pulling our feed grinder down the road to a distant farm, I happened to glance back at the exact moment I was passing our neighbor’s driveway.  To my horror the load auger on the feed grinder had bounced loose from its cradle and was swinging wildly out over the ditch.  Before I could react, it crashed into the neighbors mailbox, totally demolishing it.  Envelopes, magazines, flyers, and what have you went flying into the air in all directions – as did the mailbox,  it’s post, and the hardware holding it all together.  It could not have been a more direct hit if I had planned it.  That moment is forever seared into my brain.  I stopped, went back, retrieved all his mail, poked the post back in the ground and balanced the battered mailbox on top.  Later that evening when he was home, I stopped over and explained the whole thing and replaced the damaged parts.

My current mailbox is once again a red tractor mailbox, only this time it’s custom made.  It was a gift of love to our daughter-in-law from her grandfather.  It is temporarily in our possession while our son and her live in an apartment in the big city.  It has four red, toy tractors on display behind sturdy plexiglass. It is definitely a tourist attraction.  All summer long people stop in front of our house to admire the mailbox and take pictures and with a friendly wave they are on their way.

I don’t believe they had mailboxes in Bible times, but one could say they did have “mail carriers,” known as couriers.  They would travel from town to town taking news and announcements from the king to the people.

Esther 8:14: “The couriers, hastened and impelled by the king’s command, went out, riding on the royal steeds; and the decree was given out.”

Suggestion: Do your mail carrier a favor and spruce up your mailbox a little this week.  And why not put a little note in there thanking them for delivering your mail?  We all look forward to that moment of the day when the mail is delivered.  It might just make their day.