The story is told of the Irishman who went to his local priest for help regarding his marriage. He told the priest that his wife was a holy terror at home. She was incorrigible. She was like a volcano ready to explode at any moment. She would fly off the handle and curse up a storm.  The parishioner asked the priest if he would be willing to come home with him, and give his wife a stern talk. Although the priest was at first very reluctant to wedge himself into the middle of a domestic dispute he agreed to go. After all it was his pastoral duty.  As they approached the house the man told the priest to wait outside for a few minutes while he went inside. When the priest asked why? The man replied, “Well, I need to go inside and get her started.”

I needed directions on how to get to a certain couple’s house, but for whatever reason, the GPS wasn’t able to identify the address I punched in. It got me to the general neighborhood but I was on my own trying to find the house. I ended up driving around for about 20 minutes until I finally figured it out.  It was way out in the country and of course, no one carries maps in their vehicles anymore, myself included.

When I got there, I rang the doorbell, but no one was home. I had a small package to drop off so I opened the door to the breezeway between the house and the garage. I set my package on the front step and left. Once outside, I heard the unmistakable noise of an engine racing and tires spinning in the mud. I peeked around the corner of the garage and saw a delivery truck, just off the edge of the driveway, buried up to its axles in springtime mud. The driver had come down the lane after me and pulled up alongside the garage, planning to back up to the front door and leave his package. Unfortunately, he wasn’t expecting to get sucked in like quicksand.

When he saw me, he shouted, “I think I just got stuck! Can you pull me out?” I could pull him out alright, but I didn’t have a chain or a tow rope.

As I surveyed the situation before me, I quickly realized I either had to leave this guy buried in the mud, or get into the mud myself. Being a kid at heart, I chose to play in the mud. Did I mention I had just washed my truck?

“Let me look around,” I said, “maybe I can find a chain.” I went into the garage, praying that I’d be able to find something I could use, and sure enough, there on the floor, under the workbench was a light duty log chain that would do the trick. Thank you, Lord.

I put my nice white, clean, truck in four wheel drive and backed into the bog. Then I had to get out and attach the chain to both vehicles. Of course, that meant getting my shoes and hands dirty – by dirty I mean covered in mud. I hooked the chain up to a solid bracket on the back of his truck and had to get down on one knee in order to reach under mine to find a secure place to attach the other end of the chain. That meant my jeans were now dirty, too. 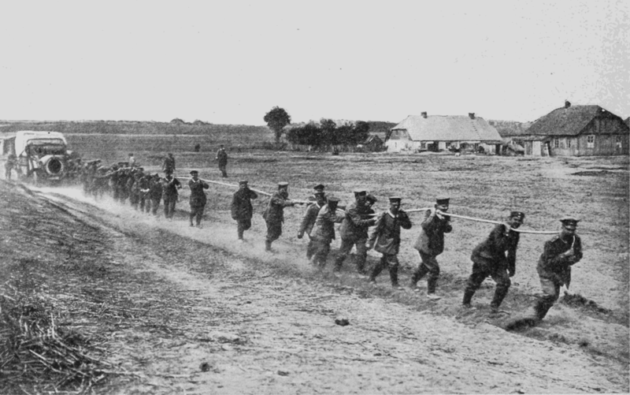 With the chain attached on both ends, I slowly tightened it and gently gave it a little tug. Nope. It wouldn’t budge. So I gave it a little more gas and a gentle tug became an aggressive pull. Mud and debris went flying in all directions. I could hear the splat of mud and water hitting my doors and could see it on my windshield. This was getting fun. I got him out.

The guy was very grateful. He thanked me over and over again. As he got back in to drive out of my life, probably forever, I gave him my usual “God bless you” and then I added, “our church is just over the hill. Come and visit us on Sunday.”

“I live in Madison,” he said, “that would be a long drive.” To which I responded, “well, you drive it everyday so you know how to get here.”

In retrospect, if we had not both “randomly” been there at exactly the same moment, he would have been stranded for a long time waiting for a wrecker or another farmer to happen along and pull him out. The house was down a long lane and unless someone purposely drove down that lane, they would not have been able to see him from the road. So I felt like a Good Samaritan that day and I didn’t mind playing in the mud and then cleaning my truck up again the next day. And as I did so, I thanked the Lord for the opportunity to help someone in need and asked Him that someday our paths would cross again. There are no coincidences with God.

“The secret things belong to the Lord our God, but the things revealed belong to us and to our children forever, that we may follow all the words of this law,” (Deuteronomy 28:29).

Have a great week everyone!

(Kevin Cernek is Lead Pastor of Martintown Community Church in Martintown, Wisconsin and Assistant to the Executive Director at Fellowship of Christian Farmers International, Lexington, IL).