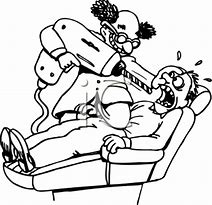 Have you ever heard someone on the radio or talked to someone on the phone and had a picture of them painted in your mind, even though you’ve never met them in person?  And then when you do meet them, they don’t look anything like you imagined?

A couple years ago I switched to a different dentist.  A few days ago I had an appointment and as I walked in the door of his office building he met me in the waiting area and greeted me with a friendly handshake.  I suppose this is not unusual, or maybe it is.  Usually when I arrive, he is in the back attending to another patient.  It occurred to me at that time, that this was the first time I had ever actually seen his face.  All my previous encounters with him were when I was in the chair and he’d walk into the room and say hello somewhere behind me.  Whenever I did happen to get a glimpse of him, he was always wearing a mask to protect his face from flying debris, so I never really saw his face.  If I had met him on the street, I would not have known who he was.

Dentists and me have come a long way since my childhood.  As I recall, a visit to the dentist back then was the most dreaded experience I ever had.  I was convinced he was some kind of reverse masochist who found great pleasure in my pain and suffering.  From what I’ve been able to piece together from the past, he apparently did not believe in painkiller and he would just drill baby drill.  One thing I learned from those visits was how to endure pain.  I don’t even want to tell you my experience in getting my wisdom teeth pulled.  Let me just say I could hear as well as feel them coming out.

Even as an adult, my encounters with the dentist were always painful.  I figured that was just the way it was and never really thought about it being any different.  Then one day I was talking about this with someone from church, and he matter of factly stated that no one should suffer pain while visiting the dentist.  Now that was a novel thought.

(This same guy served on our Board of Elders.  At one of our meetings we were discussing how something he had predicted earlier had come to pass exactly like it said it would.  We chuckled about the outcome and I asked him how it felt to be right.  His responded very matter of factly:  “It feels normal.”)

The next time I went to the dentist, I told him I did not want to feel any pain. He said that would not be a problem.  He got his gigantic needle out and positioned himself over me in a very authoritative way.  Now that I think about it, it was much the same as I position myself when working with a cow when I am about to administer a bolus into its stomach.  With one arm around the cow’s head, I take hold of her jaw, forcing her mouth open so I can administer the proper medication.  That’s pretty much how I envision what this dentist was doing.  Of course, it was nothing like that, or was it?

This same dentist then asked me if I wanted headphones with music to relax me while he was drilling.  Sure I did.  He then he asked if I wanted nitrous oxide?  I didn’t know what that was.  He said it was also known as laughing gas.  Who wouldn’t want that?  So he put a mask over my nose, turned a knob on a canister behind me and I was good to go.  I have to say the nitrous oxide lived up to its nickname.  Between that, the novocaine, and the 80’s music blasting in my ears,  I did not feel a thing.  I could have stayed there all day, but when I asked, he said no.

The story doesn’t end there, after all the drilling and laughing was over, I had to make an appointment for next time.  As the receptionist was suggesting future dates that would work, I leaned over the counter to get a better look at her calendar.  To my horror, a big splat of drool landed right smack on her desk. I didn’t know I was drooling because I had no feeling in my jaw.  So the laughing continues to this day.

I’m happy to say my dentist visits no longer involve all that trauma.  The dentist simply localizes the area where he’s working and I feel no pain whatsoever (I think laughing gas has been outlawed).  I actually like my dentist.  We’ve come a long way.

One of my all time favorite Bible passages is in Revelation 21 where it is describing what heaven will be like.  One of my favorite things about heaven, (actually every description of heaven is my favorite) is that there will be no pain.  “He will wipe away every tear from their eyes; and there will no longer be any death; there will no longer be any mourning, or crying, or pain; the first things have passed away.  And He who sits on the throne said, “Behold, I am making all things new.”

That’s hard to imagine.  But the next verse says: “These words are faithful and true,” (Rev. 21:6).  The child of God has much to look forward to.