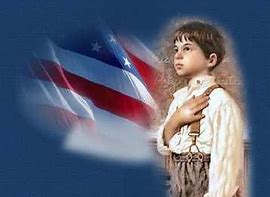 Section 4 of the Flag Code states:

The Pledge of Allegiance to the Flag:  “I pledge allegiance to the Flag of the United States of America, and to the Republic for which it stands, one Nation under God, indivisible, with liberty and justice for all, “should be rendered by standing at attention, facing the flag with the right hand over the heart.  When not in uniform men should remove any non-religious headdress with their right hand and hold it at the left shoulder, the hand being over the heart.  Persons in uniform should remain silent, face the flag, and render the military salute.”

I recall as a child in first grade, standing next to my desk each morning, facing the flag and reciting the Pledge of Allegiance with my right hand over my heart.  My teacher, Mrs. Duckworth, would then lead us in a prayer. Halfway through the year, the prayer was outlawed, but we continued to say the Pledge each and every day.

Today, we seem to be living in very tumultuous times.  I heard on the news just last night, that someone, somewhere has declared the American Flag a racist symbol.  Our beloved flag has now become a political canon to be volleyed back and forth between the political parties.  One has to wonder, what’s next?

Watching the news can be very unnerving.  My wife and I have an elderly friend who had to stop watching the news – by doctor’s order!  She got so upset at one point she threw her shoe at the television set, her blood pressure shot up through the roof, and she ended up in the hospital that night with an irregular heartbeat and high blood pressure.  (Not all of our friends are this crazy).  She no longer watches the news.

That type of behavior may seem a little extreme, but most of us can relate to our friend’s frustration in one way or another.  We feel helpless to do anything about the political situation of our day.  But there are some things we can do: 1) We can vote.  One little vote among 350 million people may seem insignificant, but those one votes at a time add up.  2) We can pray. We are in fact instructed in the Bible to pray for our nation and for our leaders.  When the prayers of God’s people reach heaven, God moves on earth.

“It was the summer of 1787.  The heat in Philadelphia was oppressive and the delegates to the Constitutional Convention fanned themselves languidly and longed for adjournment.  Debate had dragged on for days… that left everyone weary and querulous.  The Convention faced an impasse.  At this point aged Dr. Benjamin Franklin rose and addressed himself to General Washington in the Chair.

“In this situation of this Assembly, groping as it were in the dark to find political truth, and scarce able to distinguish it when presented to us, how has it happened, Sir, that we have not hitherto once thought of humbly applying to the Father of Lights to illuminate our understandings?”

He stated that it was his firm belief that without divine aid they would succeed in their political building no better than the builders of Babel, but would find themselves so divided and split by local interests that they would become a reproach to future ages.

He then concluded:  “I therefore beg leave to move that henceforth prayers imploring the assistance of heaven and its blessings on our deliberations, be held in this Assembly every morning before we proceed to business, and that one or more of the clergy of this city be requested to officiate in that service.” 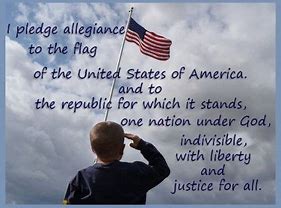 Benjamin Franklin had made his point.  Nations do not rise or continue at the whim and desire of men.  A higher Power must be reckoned with, for the ultimate destiny of nations lies in His hands.”  (End quote. From the book:  “A Nation Under God?” (Word Books, Waco, TX).

There is one great fact that cannot be denied— whether it be in history, in nature, and/or in Scripture.  It is called “the law of retribution.”  Even an atheist, who does not believe in God at all, must admit that when one examines the laws of nature they are faced with the fact that one either obeys them, and lives, or disobeys them, and dies.  There is no other alternative.

All of our wisdom and adaptability must function within these immovable limits.  We are not at liberty to go beyond them.  No one fools around with 10,000 volts of electricity, hoping to make up the laws of electricity as he goes along.  The laws are already in force and he had better discover them before he starts.

So it is also with nations.  The French Emperor Napoleon ruled Europe in the late 1700’s and early 1800’s.  Someone asked him if God was on the side of France.  His answer was:  “God is on the side of the heaviest artillery.”  Then came the battle of Waterloo, the loss of his empire, and, finally, his exile to St. Helena.  There, defeated and humbled, he said, “Man proposes; God disposes.”

Psalms 147:10 states:  “His pleasure is not in the strength of the horse, nor His delight in the legs of a man; the Lord delights in those who fear Him.”

Ben Franklin understood the need for regular prayer for our infant nation. The Apostle Paul understood the need for prayer for our nation’s leaders. He said in 1 Timothy 2:1-3:  “I urge, then, first of all, that petitions, prayers, intercession and thanksgiving be made for … all those in authority, that we may live peaceful and quiet lives in all godliness and holiness. This is good, and pleases God our Savior.”

Dear God, I pray for our president and his advisors, for our Congressional representatives, our state leaders, and our local law enforcement and government leaders.  May your will be accomplished through all of them. Amen.