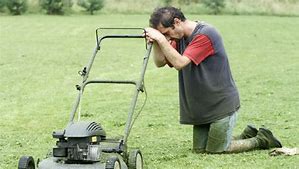 There was a new preacher in town in need of a lawn mower.  Someone in his congregation heard about it and brought him over one that was well used.  When it came time to cut the grass, the preacher got the mower out and attempted to get it started.  When he was unable to do so, he got on the phone and called the guy who gave it to him and explained his dilemma.  “Oh,” the guy said, “I forgot to tell you that if you can’t get it going right away you have to cuss at it while you’re pulling the rope.”  The preacher didn’t know what to think.  After a short pause he said, “It’s been a long time since I’ve been in the habit of cussing.  I don’t know if I remember how.”  The mower guy responded, “You just start pulling on that there rope, it’ll come back to you.”

If you could turn back the clock and change the past as it relates to your life, what choices and decisions would you change knowing what you know today?  Many times, we know what is the right thing to do, but we choose to ignore it and do what we feel like at any given moment.  That most always leads to regret (or worse) later on.  Sometimes we simply don’t want to think about the consequences of our choices at the time, so we pretend the obvious doesn’t exist and we walk into wrong decisions.  Everything is going just fine today, we reason, why worry about tomorrow.  The Bible says, “there is a way that seems right to man, but in the end leads to death.”  Everything we do should be considered in light of God’s Word.  That is our guide to live by.

When I was in Bible college many years ago, I remember buying a brand spanking new electric typewriter.  It was awesome.  Among other cool accessories, it had an automatic corrector.  All you had to do was backspace to the place of the error, hold down on the correction key, while pressing the key of the wrong letter.  It would automatically white out the error and you could type in the correct letter and no one ever knew you made a mistake in the first place. That was cutting edge technology. 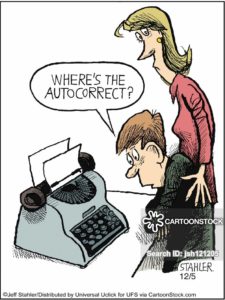 But that was a long time ago. Now we have computers.  I can type about 900 words a minute – or so on this thing. What about errors, you ask?  Who cares?  When I get done a simple click on the spell check icon, and just like magic – the corrections are made for me.  The computer is even nice about it.  It simply makes “suggestions” on what would be a better choice of words.  Now if they would only come up with a machine that could read my thoughts, type them, and print them without me ever having to sit down at the computer – that would be something.

What if we could take all the errors we ever made in life, hit spell check and have them fixed all at once.  Wouldn’t that be great?  I once knew a gentleman who lived to be about 90 years old.  He was my mentor and encourager in my early days in the ministry.  He had more confidence in me than I had in myself.  As a young, unsure college student about to embark on my life’s path, I  needed someone like him to encourage me.

He had lived a long, difficult life and had overcome many hardships. The worst was when he lost both of his children to natural causes when one was three and the other two years old.  We spent quite a bit of time together, me as a 20 something year old and he in his 80’s.  In spite of his hardships, he didn’t dwell on the past.  He was thankful for the blessings he had.  He was healthy right up to the end.  In fact, he died of a heart attack while fishing with his wife up in Door County, Wisconsin.  While casting off the bluffs into Lake Michigan, God sent His angels and they came and carried him home.  A few months before he died he told me he had lived his life with no regrets.

That was more than thirty years ago.  I’ve never forgotten this gentleman. He had a special relationship with God – one that I’ve always admired.   When we come to God in repentance and accept the work of His Son on the cross and take Him as Lord and Savior, the Bible tells us God wipes our slate clean.  Our transgressions are no longer held against us.  Our sins are separated from us as far as the east is from the west, buried in the deepest sea, remembered no more.  God takes those circumstances in our lives that want to defeat us, and He turns that very thing into victory.