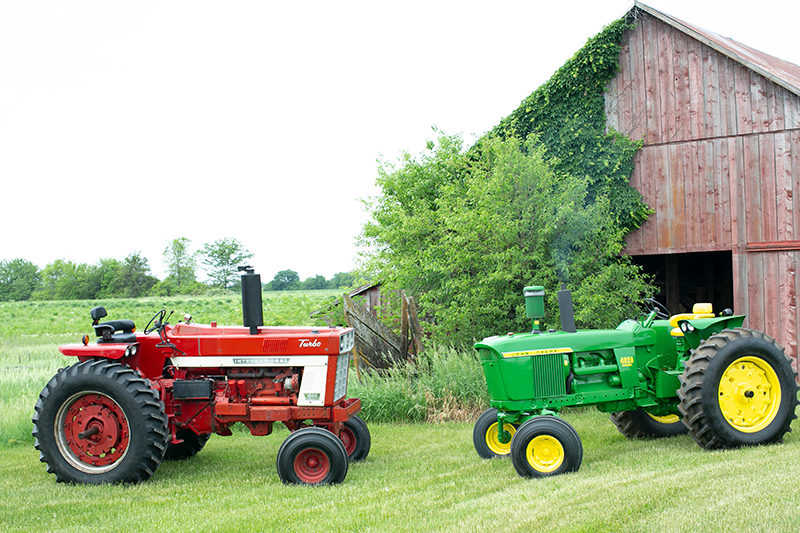 I have a couple of red tractors in my shed. I used to have a green one too, but I sold it a few years ago. I sold it, well, because it had a reputation for not starting. (My dad always said: “I refuse to drive a tractor that won’t start.”)  It had to be started by spinning the flywheel by hand. That wasn’t so bad, but after it warmed up, if you shut it off, it was impossible to start again. So the problem was, I had to let it run all day because it was only good for one start a day.

For reasons that had nothing to do with the law, I sold it to the Sheriff. He has lots of green tractors so it’s in good company. (He got a good deal on it too – just saying).

One Christmas I parked a red one and the green one in the front yard.  I decorated the silhouette of each with red and green lights respectively and received a lot of likes from passersby. I only did that one year because it was very time consuming setting it up, and my tractors had to sit outside for a few weeks and it rained a lot that year in December and I had water-in-the-gas issues afterward. It’s a lot simpler helping my wife decorate the bushes around the house with twinkle lights.

At times, it almost feels surreal as we celebrate Christmas this year. The world is such a mess and it would be all too easy for God’s people to fall into despair and disillusionment. But take a moment and read of the glory and beauty of heaven that is yet to come (Revelation, chapters 21 and 22) and be reassured, that our God is working to bring all things to their consummation in Christ. Oh, what a day that will be!

Speaking of the law, Galatians 4:4-5 says: “When the fullness of time had come, God sent forth his Son, born of woman, born under the law, to redeem those who were under the law, so that we might receive adoption as sons.”

God sent forth His Son. Jesus came to us. He took our flesh.  God became a man in Jesus.  He took His stand with us so that He could take action for us. He came as one of us, to do for all of us what none of us could do for ourselves.

Jesus was born under the law.  He entered a life in which He was placed under His own commands.  He fulfilled the law as one of us and then He laid down the only perfect human life that has ever been lived as a sacrifice for the sins of all who will receive Him.