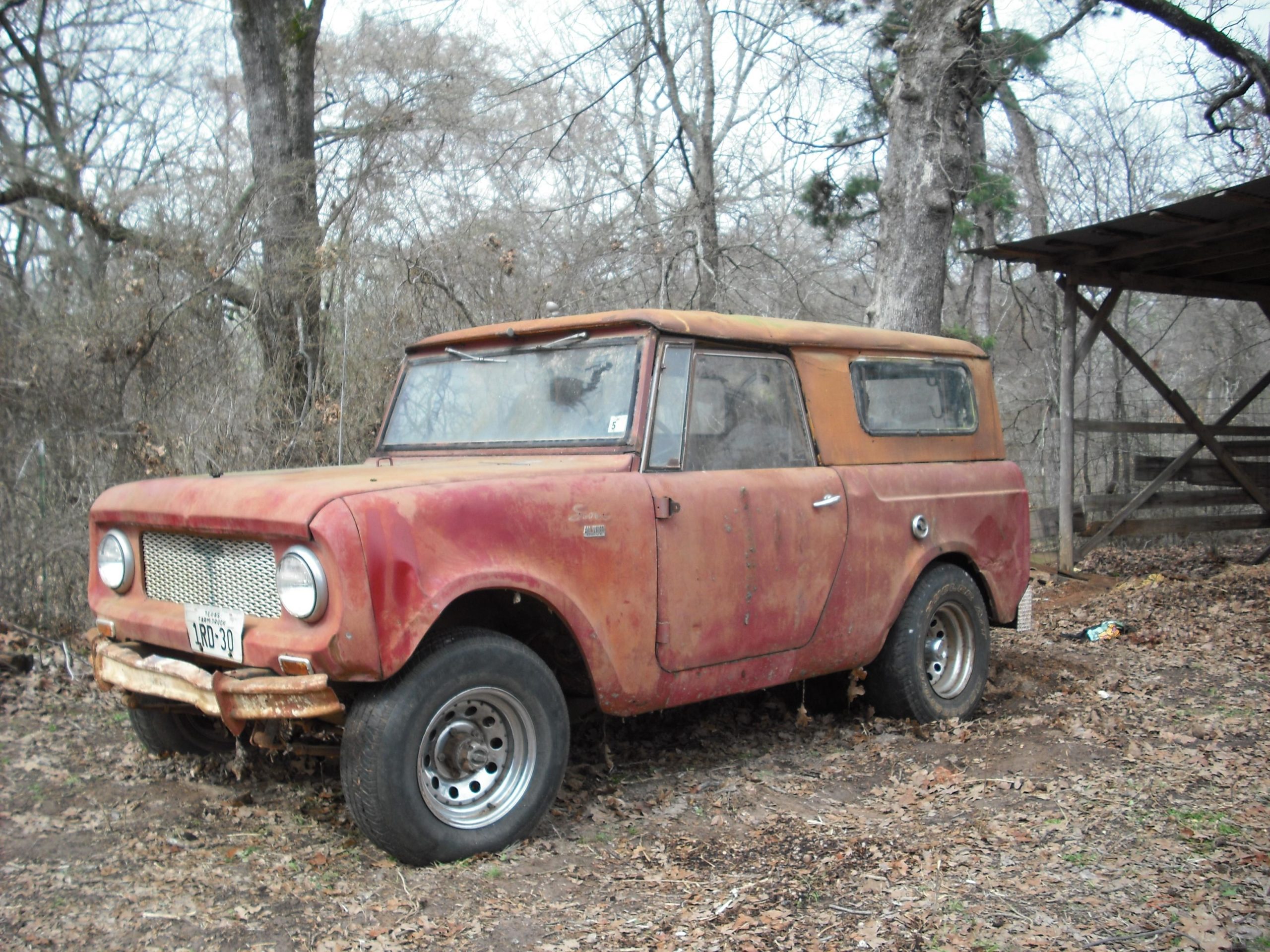 I used to own a 1965 International Harvester Scout. Back in the day IHC  not only made tractors and farm equipment but they also made SUV’s. The Scout was one of the original SUV’s. I picked my Scout up as an exchange for working for a farmer. It was a red two door, with a removable top. It had a three speed transmission and four cylinder motor.

The farmer used it around his farm for chores and such. By the time it caught my eye, it had seen it’s better day. I asked him if he was interested in selling it. He said no, but he might trade it for me working for him. That seemed like a good deal, so I went to work in the promise of getting an old, rusted out, beat up vehicle. But I was happy with the deal. If I recall correctly, I worked for him for about two months until my payday. He said the Scout was worth about 300 bucks and I had worked long enough to earn it.

I was the happiest boy alive when I drove it home.  I cleaned it all out and even washed it. I put it in four- wheel drive and took it down to the creek and splashed through the mud and water then took it back up to the milkhouse and washed it again. We used it around the farm for a few years and I taught my nephews and nieces how to drive a stick shift with it. It had earned a place in my heart.

A few years later I grew up and got married. I felt like God was calling me to the ministry so my wife and I packed up and moved to Arizona where I attended Bible College. Before we left home, (which incidentally was the day after Thanksgiving) we gave away all our non-essential earthly belongings – like furniture, the lawn mower, clothes, dishes and what have you. When we left on our life adventure, all the possessions we owned were neatly packed in the back seat of our car.

One of the things I parted with was my little red IHC Scout. It wasn’t really worth much, so I gave it to my brother and made him promise he would take care of it. That was the most difficult possession I had to part with. I can still see it sitting in front of the barn all droopy the day I drove away.

A few weeks later, I received a large envelope in the mail from my brother. When I opened it, I found written in bold letters across the top: “LAST WILL AND TESTAMENT.” It seemed a little odd that he would give me a copy of his will. But as I read down the list of his earthly possessions I came across a line which read: “To my brother, Kevin, I will the little red IHC Scout.”

Talk about mixed emotions! There was a possibility I could actually get my Scout back someday (haha).  That didn’t happen. But it did start a movement among my brothers. Several years later, one of my other brothers bought a Scout with a four cylinder, Nissan diesel engine in it. That really seemed odd, but come to find out, it came from the factory that way.  It wasn’t long until the brother who had willed me the red Scout bought one similar to that one, only it was blue. A short while later a wrecked up Scout appeared out behind the shed – purchased for parts. Today, these old Scouts are collector items and are worth a lot of money. A few weeks ago a friend of ours showed up at church in a Scout. I could hardly believe it. They have five kids in their family and all I’ve ever seen them drive is a mini-van. I had no idea.

What brought this all to mind was an editorial I recently read. The writer was making the point that we live in unprecedented, perilous times and we  need to have  our last will and testaments in place and up to date. I agree with having your will up to date and in place. But I do not agree that we are living in unprecedented, perilous times. The times have always been perilous. Life has always been short. Death has always been a breath away. We need to live life in that context. Life is a gift – a very fragile one at that. Don’t live in fear of what you cannot see – live by faith in the Creator who has all things sovereignly in His control.

Acts 17:25-28: “He gives to all people life and breath and all things that they would seek God, if perhaps they might find Him, though He is not far from each one of us; for in Him we live and move and exist.”