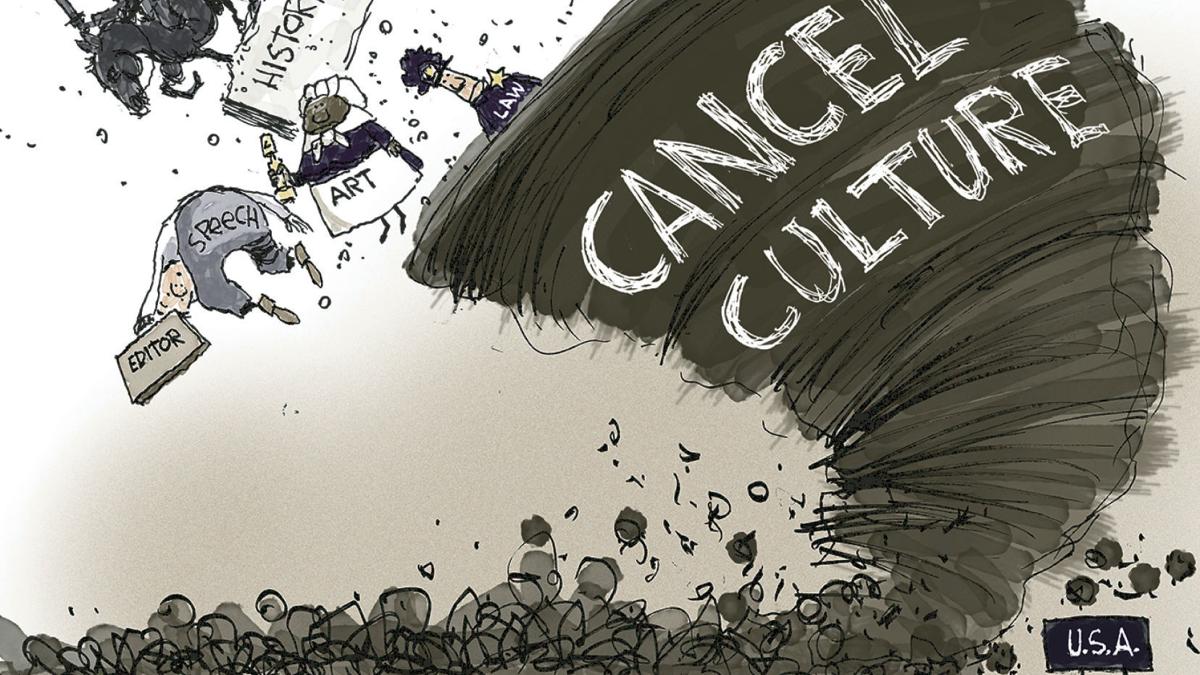 Unless you’ve been hiding under a rock the last few months, or been in a coma, or in military Boot Camp, you’ve probably heard the phrase “cancel culture” more than once.  What exactly does “cancel culture” mean?

Well, one of the odder ideas to snowball its way into the climate of the times during this decade’s turbulent second half, is the idea that a person can be “canceled.”  In other words, they can be culturally blocked from having a prominent public platform or career.

Within the past five years, the rise of “cancel culture” and the idea of canceling someone have become polarizing topics of debate as a familiar pattern has emerged:  A celebrity or other public figure (including an historical figure canonized by a statue, let’s say) does or says something deemed offensive.  A public backlash, fueled by politically progressive social media, ensues.  Then come the calls to cancel the person — that is, to effectively end their career or revoke their cultural stature, whether through boycotts or other actions to diminish them – like tearing down a statue.  This person or entity can be stripped of their status due to accusations whether they have merit or not.  Cancel culture leaves no room to debate or understand all sides of a story.  It is a way for marginalized people or groups to assert their values in pop culture.  But what comes out of this ideal can be more harmful than beneficial.

If someone feels offended by a certain personality, or saying, or symbol, or even history itself, it must be removed – cancelled from our culture.  That is the trend of our culture today, and it seems very short-sighted and troubling.

Our nation and the world seem like a hopeless mess right now. But that is all about one’s perspective because in Romans 12:12, the Apostle Paul tells us to “rejoice in hope,” and the hope that Paul speaks of is not located in this world, but in the world which God is preparing for those who fear Him and love His Son.

What is hope?  Dictionary.com gives this definition: “the feeling that what is wanted can be had or that events will turn out for the best:  a particular instance of this feeling is the hope of winning.”

But that is not the Christian’s definition of hope.  Our hope is defined by the anticipation of what is to come.  That anticipation is grounded in the work of Jesus on the cross and His resurrection from the dead.  Our hope is based on the promises of God’s Word.  Our hope is more than a feeling.  It is more than hoping everything turns out.  The Bible tells us that in the future of God’s children, there will be no more death or sorrow or pain because Jesus is making everything new and Jesus said His words are trustworthy and true, (Revelation 21:3-5).

I like everything about those verses and I quote them often.  But do you know what the best part of that passage is?  It is where Jesus tells John: “These words are trustworthy and true.”

Those promises are not just a “feeling” we have that everything will turn out ok.  Or if we keep our fingers crossed God will make it happen.  Jesus told us that after He left this earth, He would send the Holy Spirit to make the things of God known (real) to us so we could live above the circumstances of this world and even above the circumstances of our own lives, because our hope is in Him.

I came across a piece by a poet and journalist named Steven Turner which I quote in part:

I’ve added a few of my own:

Think about that … Sin will be no more.  It will not be in you and it will not be around you.  Never again will you grieve your Savior.

Now that’s a cancel culture I can live with!