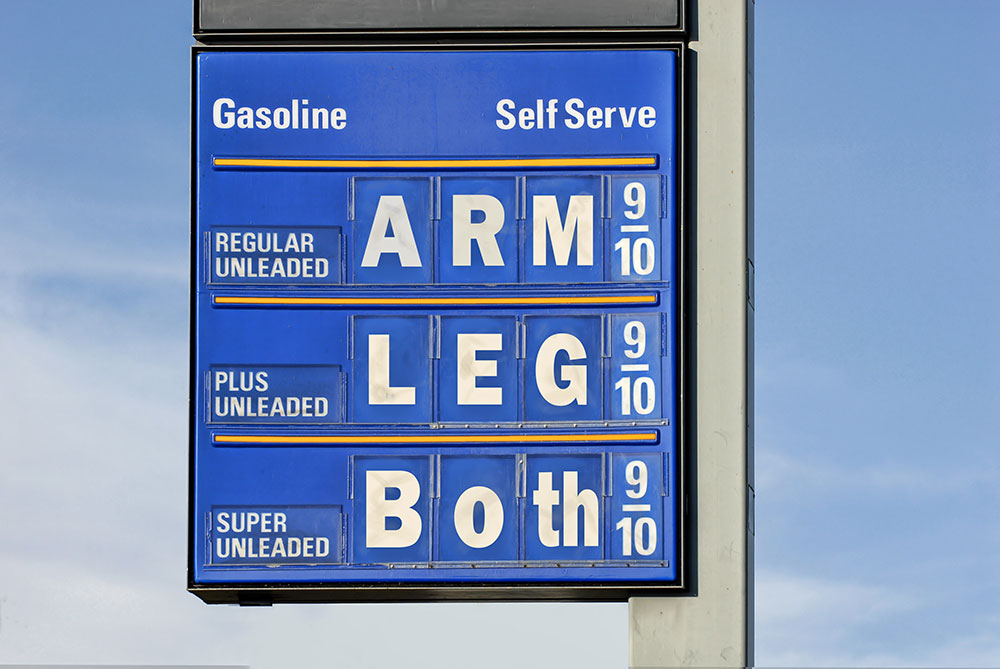 Last week my wife and I took a trip to Nashville, Tennessee to visit our daughter and son-in-law. It used to be when we traveled, we hit the pavement with the tires squealing and we didn’t slow down until we got there. That meant not stopping along the way unless we absolutely had to. It still is that way in a sense, but not quite as intense. I hate to say it, but one of our goals is to not buy gas in Illinois. I know this hurts the border town gas stations but it’s a lot more economical to drive across the border to gas up – especially if you’re saving fifty cents a gallon or more. Like my father-in-law once told me: “It all adds up.”

It’s a matter of principle. The price of gas is what it is because of corrupt politicians. I’m not going to encourage it. I don’t view fossil fuels as a curse to the planet. I see them as God’s blessing to us. They have made life better for just about everyone. Imagine not being able to travel, or to heat your home, or enjoy air conditioning. Imagine no car shows or airplanes or ocean liners. Imagine only mud roads and thatched roofs. Try to imagine life without electricity and technology. It’s all the result of fossil fuels. Our politicians should be finding ways to make it more accessible and more affordable to us, not more difficult to obtain and more expensive.

On the way home, we filled up in Tennessee where the price was exactly $3.09 a gallon. We topped the tank off in Kentucky where it was $3.29. We stopped at a Truck stop to add a few gallons and buy a sandwich just south of the Wisconsin border where the price was $4.09 a gallon. We ordered our sandwiches and got up to the register to pay and the total came to 37 dollars. That’s 37 dollars for two sandwiches. Ok, so it was our fault we didn’t read the prices on the menu before we ordered, but in our defense, this was a franchise restaurant that advertises everywhere and the latest ad that I had seen was three sandwiches for 17.99. I never expected it to be 17.99 each. But that’s part of the hazards of traveling – gauging the consumer whenever possible. I expressed shock at the price of the sandwiches and the kid behind the register said: “Hey, I don’t set the prices. I just take the money.” I asked to speak to the manager and she came out of the back and reviewed the prices and assured us they had been rung up correctly. I kindly asked if we could cancel our order and not pay. She obliged, took our sandwiches, and we left hungry, but satisfied. Satisfied because we weren’t taken advantage of.

Earlier, at another gas station, a couple pulled up to the pump opposite us with a nice pickup and camper unit. We exchanged greetings, stretched, and I started the pump to fill up. My wife struck up a conversation with them and the next thing I knew, they were offering to give us a tour of their camper. Actually they were very excited about it. Did I mention we were perfect strangers? They apologized about the “mess” inside because a few items had shifted during transit. After the tour, we stood in the parking lot and chatted like we were old friends. We chatted for a long time – maybe close to an hour (what’s the rush?) They live in Florida, have family in Minnesota and Iowa, were gassing up in Tennessee and had just spent the night in a town in Wisconsin that started with the letter M. They couldn’t remember the name of the town. Well, there are hundreds of towns in Wisconsin that start with the letter M so I didn’t even attempt to identify it. But my wife said, “Would it be Monroe, Wisconsin?” And they said, “YES! That’s the town!” Turns out we have a mutual friend who lives in Monroe, Wisconsin. How random is that? I guess one would say, “It’s a small world.” I would also say, “There are no coincidences with God.” The story is still being written.

While in Nashville, we got up early on Sunday morning and went out for breakfast. Then on the way back to the kids’ house, there was a traffic accident right at the exit we needed to take. Both westbound lanes were totally blocked. We were stuck there for a good half hour or more, stopped cold in our tracks.  Finally we were able to go and we hurried off to church, getting there just in the nick of time. The Pastor was a friendly chap, (not famous) somewhat animated, and gave a very interesting and challenging message. Later that day, we watched the service from back home on Martintown Community Church’s Facebook page. It’s interesting because the message we heard in Tennessee was almost the same message we heard from MCC.  Funny how that works.

After we got home, we shucked a couple dozen ears of sweet corn that we brought with us from Wisconsin and watched as all the traffic from the Interstate was detoured on the country road that went right past our daughter’s house. They live on a narrow country road where, on a normal day, it’s a challenge for oncoming traffic to pass without ticking mirrors (FYI – it happens). I’m not sure why the GPS routed them that way, but it went right by the house and it was fun watching all the different sized vehicles go by. There were cars, trucks, semis, cattle trailers, campers, U-Hauls, wide loads, UPS and Fed-Ex tandems – just picture anything you would see on the Interstate – all of them going by in slow motion at about 30 mph. It made me think how God sometimes uses detours in our lives to slow us down when we get going a little too crazy.