In the Middle Ages, scholars of the church debated at great length issues like how many angels can dance on the head of a pin? But that is a foolish debate. Angels are spirits, and as such do not occupy space.  The head of a pin is the same as the top of a mountain to them.

One time when I was at a church meeting, our cattle got out at home.  They sprinted out of the unlatched gate “someone” had left open, kicking up their heels and leaving gigantic divots in the yard.  My wife was working in the garden when she looked up and saw a herd of cattle suddenly stampeding toward her.  She ran at them, waving her arms and shouting for them to return from whence they had come (or something like that).  About that time, our neighbor happened by on his motorcycle and seeing the action, stopped to help.  Eventually they managed to turn the cattle around and back through the gate and safely into their pen.  My wife turned to our neighbor and said: “You’re an answer to prayer.  An angel sent from God.”  He laughed and said he’d been called a lot of things in his life, but never that.

The Bible is full of references to angels. The word angel means “messenger of God.” Some people believe that we all have a guardian angel assigned to each one of us to keep us safe.  You may have seen the bumper sticker that reads: “Don’t drive faster than your guardian angel can fly.”  While we cannot say for sure, biblically speaking, that we all have our own personal guardian angel, there is biblical evidence that God sends His angels to guard, protect, and help us.  Not just one angel, but perhaps many angels at different times of need. And, there is biblical evidence that angels sometimes take human form when they interact with God’s children. 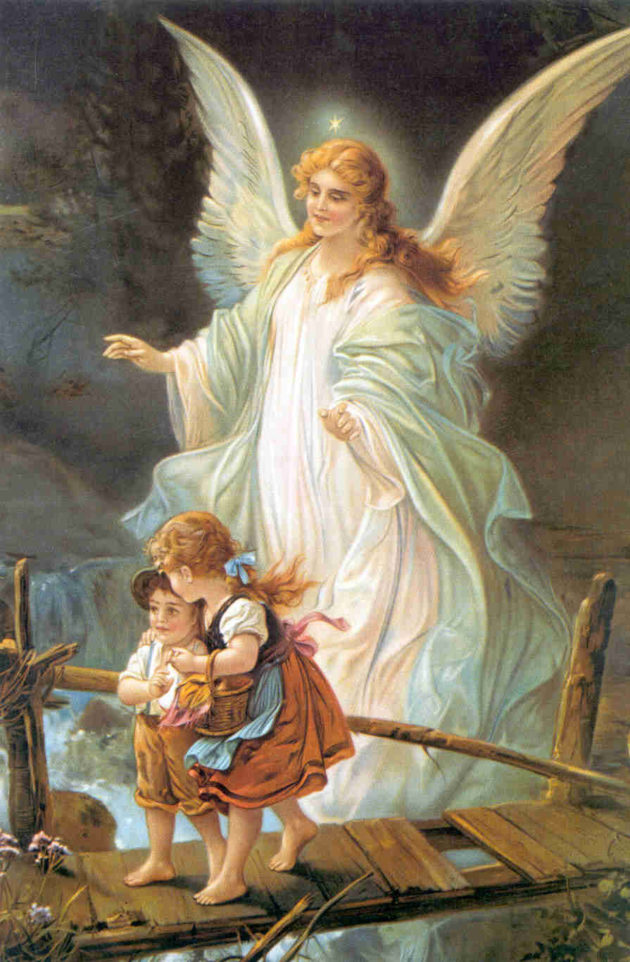 For instance, in the Old Testament, in Daniel 9:23 it says that the angel Gabriel came to assist Daniel and said: “As soon as you began to pray, an answer was given, which I have come to tell you.”  In another instance, in the very next chapter, in Daniel 10:12, an angel was sent to Daniel who said to him, “Since the first day that you set your mind to gain understanding and to humble yourself before your God, your words were heard, and I have come in response to them.”  This tells us that God hears the prayers of His servants and sometimes sends help via the form of angels.

The New Testament writers also talk about angels.  in Hebrews 13:2 the writer says: “Do not forget to show hospitality to strangers, for by doing so some people have entertained angels without knowing it.”  We just never know when that may happen, so we better be aware of that possibility at all times.

The Apostle Paul suggests that the angels watch the activities of our local assemblies. He wrote in 1 Corinthians 4:9 that: “We are made a spectacle unto the world, and to angels.”  That word spectacle does not mean we are making fools of ourselves.  It is where we get our word “theater.”  That verse (and others) mean the angels are watching us, as Christians, on how we live our lives and how we worship and praise our Creator.

What predicates all this angel talk is that God chose His Church – a.k.a. true believers – as the means to get the message of salvation out to the unbelieving world.  The Apostle Paul says that salvation through Jesus Christ was a mystery that God chose to reveal through His people in these New Testament times.  We are actually living in New Testament times today.  We are the people God has chosen to get His message out.  Not angels, but us.  In Ephesians 3:10 the Apostle Paul wrote that God’s “intent was that now, through the church,the manifold wisdom of God should be made known to the rulers and authorities in the heavenly realms, according to His eternal purpose which He accomplished in Christ Jesus our Lord,” (emphasis mine).

And so, we the Church, are the theater for this plan to be brought out to the world, to the angels, to “rulers and authorities” in heavenly places.  The Apostle Peter, when discussing the mystery of our salvation, said that, “even angelslong to look into these things,” (1 Peter 1:12).  Certainly the angels know about the power of God as seen in His creation. But the wisdom of God as seen in His new creation, the Church, is something new to them.  Unsaved people, including wise philosophers, look at God’s plan of salvation and consider it foolishness (1 Corinthians 1).  But the angels watch the outworking of God’s salvation, and they praise HIs wisdom.

All of heaven is watching, and the entire program of God has been committed to us – until the world arrives at that great day when all creation will bow together before the Lord Jesus and declare that Jesus is Lord, to the glory of God the Father.

You and I are called to advance that work.  It is the most significant endeavor we can do.