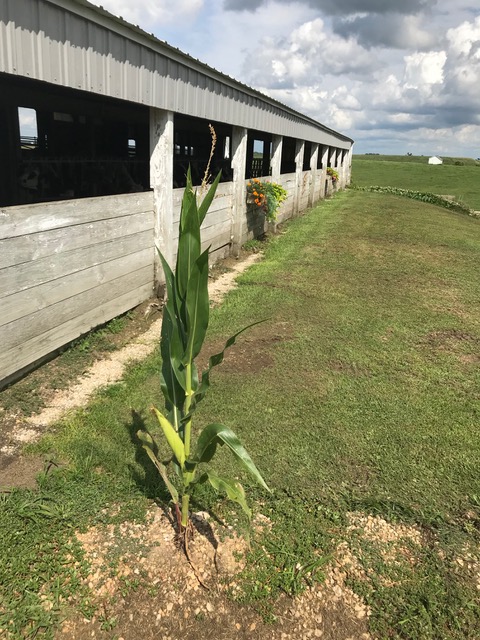 Summer was late arriving this year.  Many of the farmers in our area did not yet have all their corn in the ground by June 1.  Some were still working around the wet spots in their fields all the way into the third week of June. But that didn’t seem to damper the crop’s enthusiasm.  The seeds sprouted and popped up out of the ground and began to grow with a fervor.

I read an article in a farm magazine that said the seed has a way of sensing when it’s growing season is short and it “knows” it has to make up for lost time due to “Mother Nature’s” antics.  In discussing a plant’s ability to detect a shorter than usual growing season, and then being able to make up for lost time, the author states:  “Scientists have discovered that if the same hybrid is planted 30 days late, it requires about 200 fewer (than normal) GDDs (Growing Degree Days) to reach relative maturity.  The reason why isn’t known.”

The author goes on to say that he “believes it may relate to survival of the species in an evolutionary sense.”  He asks: “Can plants detect from day length that they need to speed up?  They want to produce seed, even if it’s smaller than normal,” (Wisconsin Agriculturist,Aug 2019, p 32, by Dave Nanda).

I don’t know about you, but the author of that article seems to be giving the plant a little too much credit for its intelligence. Does an inanimate seed, buried in the depths of the earth, have the ability to reason and conclude that it needs to hurry up and grow because it doesn’t have as much time to reach maturity as it would in a “normal” year?  Or is there something or Someone much larger involved in this whole process?

Would we rather give credit to the seed in the ground for its ability to adjust to the weather and grow or would it be wiser to look to the Creator and give Him the credit?  Afterall, God made this promise to Noah after the Great Flood: “As long as the earth endures, seedtime and harvest, cold and heat, summer and winter, day and night will never cease,” (Genesis 8:22).  God’s promise is that until the end of time, there will always be “seedtime and harvest.”  It is God who makes the crops grow.  It is He who sends the rain and the sunshine in due season.  “I will send rain on your land in its season, both autumn and spring rains, so that you may gather in your grain,” (Deuteronomy 11:14).  It is not an evolutionary process.  It’s a miracle that God performs year after year in keeping with HIs own promises.

My wife plants beautiful flowers all around our farm buildings every year.  In our vegetable garden she plants radishes, tomatoes, green beans, peppers, and all kinds of other tasty summer treats, which she then cans and freezes and we get to enjoy all winter long.  At one end of her garden she plants sunflowers.  At the other end she plants moonflowers. The sunflowers turn their heads to face the sun every morning.  The moonflowers bloom every evening at about sunset.  In the middle of the garden is a row of marigolds.

There are flowers in hanging baskets on the back porch.  Hanging on the heifer shed facing the road are a couple of planters I built where she planted viney plants and beautiful blooming flowers (I can’t possibly remember all the varieties of all her flowers).  In the front of the house is another garden with a variety of colorful flowers.  This time of year they are all in bloom and add to the beauty of God’s creation around us. We also have two apple trees whose branches are beginning to sag under the weight of another bountiful year of apples. 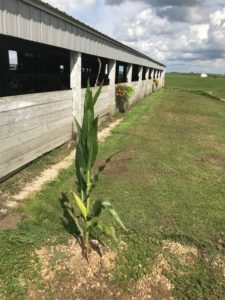 All that, and on the edge of the driveway, with its roots safely anchored in the gravel, is growing a single stalk of corn.  The seed must have escaped from the bucket we used to carry to feed the heifers last spring.  This stalk of corn is located in such a strategic spot that it escaped the blades of the lawn mower and the string of the trimmer.  It is basically growing out of nothing but gravel.  A couple weeks ago it tasseled and produced an ear with silk. Now it has two ears.  All I’ve done is watch it grow.

With all the beauty around, it is the subject of conversation by those who stop by. It reminds me, not of evolution, but of the miracle of creation and new life, and the unlikely ways in which God will breathe life into barrenness and hopelessness.  It seems impossible that a random seed would find its way to the edge of the gravel, bury itself, sprout, grow, and produce.  Yet there it is, along with all those beautiful flowers, as a constant reminder of our Creator’s majestic power.

“Observe how the lilies of the field grow; they do not toil nor do they spin, yet I say to you that not even Solomon in all his glory clothed himself like one of these,” (the words of Jesus in Matthew 6).