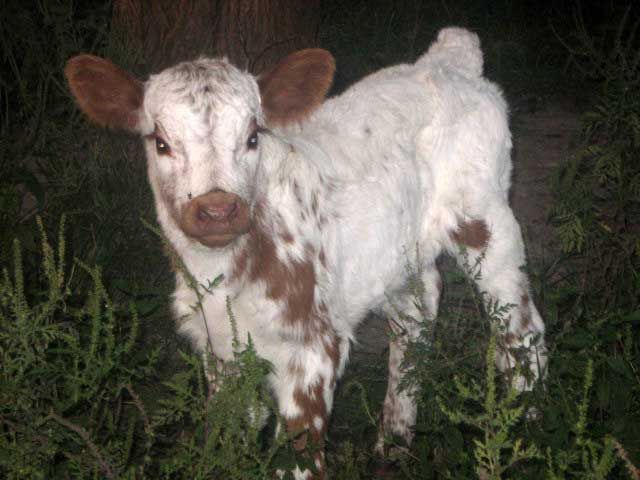 Every time we go to church we pass by a herd of red and black angus cattle grazing contentedly in their pasture. These cows are in tip top shape. Their shining red and black coats glisten in the sun. When we had an angus herd when I was a kid, my dad mixed linseed oil in with their feed, which brought a beautiful shine to their hides. That shine is a sign of good health.

It’s fun to observe the neighbor’s cattle as we drive by. As winter gives way to spring the cows drop calves and they grow rather rapidly. This year, we noticed something odd about the herd and that was that there was an almost all white calf mingled in among the red and black cattle. The odd one had just a few black speckles, but it was obviously a holstein.

Apparently, one of the momma cows lost her baby at calving and the farmer got a foster calf for her to raise. This calf sticks out like a sore thumb. It also is growing about twice as fast as it’s angus counterparts. All that good milk and grass and that calf is almost the same height as his surrogate momma. It’s quite a sight to see such a large calf nursing from such a small cow. It’s funny too, because the rest of the herd doesn’t even notice the oddity of the whole situation. Just us humans.

This week I had the joy of helping a friend gut an old garage. The structure of the garage was in excellent shape, except that over time the steel roof had begun to leak. It leaked because through many seasons of rain and snow, freezing and thawing, cold and heat, the nails holding the sheets of steel down began to loosen; the rubber sealants became brittle, and then gone, and the roof developed hundreds of little holes all over the place when the nails fell out. As a result the insulation in the ceiling below became moldy and very gross. You couldn’t go anywhere near that garage without the smell of mold overwhelming you. You could even smell it in the house. That insulation had to go.

We estimated it to be about a four hour job to tear off the crusty particle board and rip the insulation down and spray the bare walls with bleach. It actually took about three times that long. And did I mention it was one of those 90 degree, high humidity days we had last week? Well it was. But it was one of those situations where we had to get it done so they could move into their house by August 1st. I showed up in a t-shirt and shorts, which at first glance might seem a little irresponsible since we were going to be handling insulation all day. Sweat and insulation don’t mix well. Not to worry though, because we had hazmat suits to wear. Picture this: two guys covered from head to toe in white hazmat suits, respirators, safety goggles, gloves, and hats. The only part of our entire bodies exposed to the air was the top of our cheeks between the bottom of the safety glasses and the top of the respirator. We went to work like a couple of mad dogs.

The particle boards had been stapled on with a power gun. They were a bear to tear down. It took a lot of pounding and pulling, and jumping out of the way as they fell in a dust heap to the floor. These sheets of wood were rotten and moldy and stinky. We had to stop very regularly to cool off and hydrate. We drank a ton of water and gatorade and kept at it from dawn till dusk. We stuffed the old insulation in 55 gallon, heavy duty construction garbage bags. We stacked the old and moldy particle board outside. We couldn’t stop until the job was done because we didn’t want to have to go through that experience again the next day.  By the end of the day, we were exhausted and the job was complete.

It’s dirty work, no doubt about it, but it is also very satisfying work. When you arrive at your goal, the blood, sweat, and tears are well worth the effort put into it. After you get back home at night, throw your sweaty clothes in the washer and take a shower, it’s the most satisfying feeling in the world knowing that, not only did you eradicate an ugly mess, but you helped someone tremendously.

I can’t help but make comparison to what it will be like for the faithful and obedient child of God to stand before his Creator at the end of this life. This life with all it’s ups and downs, joys and disappointments, laughter and sorrow, and everything else we experience will one day be worth it all when at last we stand in the presence of our Lord and Savior. Reminds me of the chorus from an old hymn:

Have a great week and we’ll see you on Sunday