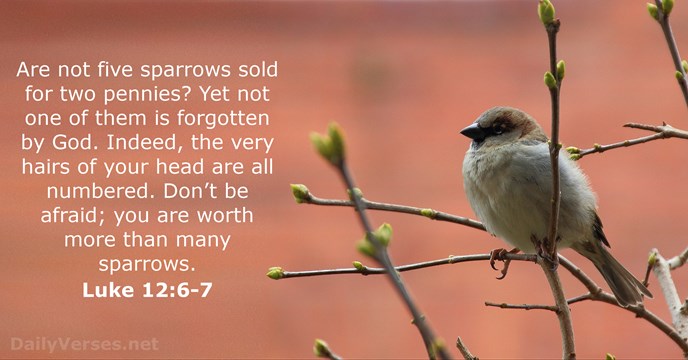 “Are not five sparrows sold for two pennies? Yet not one of them is forgotten by God,” (Luke 12:7). The other day a gust of wind ruffled the trees in our yard and when I went outside later, I saw a bird nest and five baby sparrows lying on the ground. They were naked little sparrows but I could see that they had just started getting feathers on the tips of their wings.  They were just sparrows – pesky little sparrows who grow up to make messy nests everywhere you don’t want them to be and they poop on everything. I wonder why they don’t make a more secure nest? Everytime the wind blows, sparrow nests fall out of the trees and we don’t give it a second thought. Yet the Bible says that God does. “Look at the birds of the air; they do not sow or reap or store away in barns, and yet your heavenly Father feeds them. Are you not much more valuable than they?” (Matthew 6:26).

The other day I received a call from the National Federation of Independent Business Owners (NFIB). A few years ago a representative from their organization came out to the farm and asked me to join. It seemed like they stood for a good cause – helping small businesses thrive seems like a good cause – so I became a member of the organization. They called because it was time to reup my membership. In other words they wanted my money.

The call came up on my phone from West Palm Beach Florida. Normally I don’t answer the phone when random numbers come up but this time I did. They told me who they were and what their business was. I had already decided ahead of time that when they called to solicit funds this year, I was going to say no. I had a few reasons for making that decision, but the main one was that I couldn’t see any evidence that they were being effective and accomplishing the objectives they set out to accomplish. They were supposed to be affecting policy in Washington D.C. that would help small businesses. I don’t know how you measure progress for something like that so I just decided to quit the organization.

With that said, I was expecting them to call and when the call came, I interrupted the nice lady on the other end of the line and told her I was dropping my membership. She asked why? But before I could answer she started telling me everything the organization was doing for small businesses in America. I wanted to hang up, but for some reason I chose not to.

I interrupted her again and said, “It doesn’t matter what you’re trying to do. Our government is corrupt and they don’t care about us.”

She said, “Oh but we do. We care about you. There’s an election coming up where we will get people in office who care about small businesses.”

The word “election” was a trigger word for me and now she really had me going. “It doesn’t matter,” I said, “elections no longer matter. If 2020 taught me anything it taught me that there is no honesty or integrity in our election system and the government will do whatever it takes to get what they want. We got ripped off and I’m not going to just throw money away supporting an organization that isn’t going to be able to change anything anyway.” By now I was majorly irritated – again.

But she insisted. And now she went totally off script: “Kevin,” she said, (using my first name for effectiveness. Apparently we were now friends.) “You can’t give up. You can’t just give up.” Previously she was just reading talking points.  Now she was speaking from her heart. And I knew she was right. She went on and on and she was so passionate and sincere that she changed my perspective and my mind. All of a sudden, things didn’t seem quite so hopeless and pointless. I could feel the resolve coming back to life inside of me.

Finally, I said, “Ok, you’ve convinced me. Sign me up for another year.” (She probably got off the phone and said to her colleagues, “Man, I sure had to work for that one!”)
It’s never a good time to quit. My grandfather, Paul Cernek was a man with a 6th grade education. He was a self-taught professional electrician and plumber; (but mostly he just wanted to be a farmer). He was very successful in life. His success was the result of God blessing his pure grit and determination. He used to tell my brothers and me, “It’s always too soon to quit.”
I guess I’ll keep fighting. I still have some spark in me.