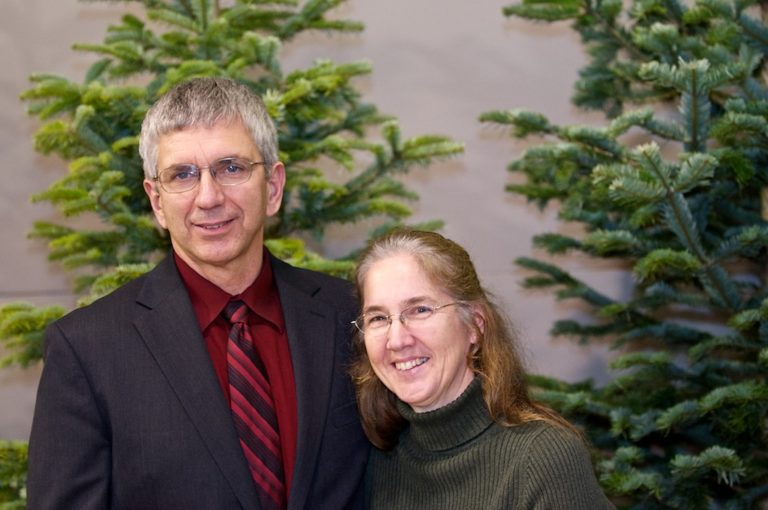 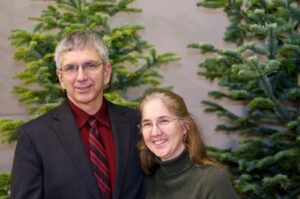 On a recent trip to Bellingham, Washington, where I visited my daughter and family, I had the opportunity to take a side trip down to Albany, Oregon. I was sent there by Fellowship of Christian Farmers Executive Director Dennis Schlagel to get the story of Phil Schrock, a farmer from Iowa. The meeting was set for December 15th at Fairview Mennonite Church in Albany, Oregon.

It just so happened that the church was performing their Christmas Pageant that night, so it was a great night to make the contact. 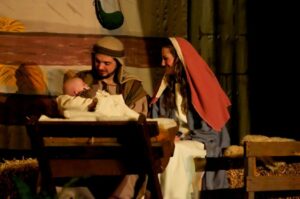 Mary and Joseph, with the newborn King 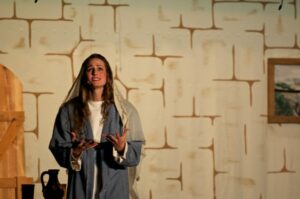 Mary, upon receiving news that she would be the mother of the Savior

I asked Phil how he got his start in ministry work for the Lord. “I sensed the Lord’s

call on my life into the ministry as a teenager even though I did not actually enter the ministry until I was 45. Throughout the years God continued to affirm that call on my life and mature me in my walk with Him. Spent several terms at Rosedale Bible College in Irwin, Ohio in the late 70’s, where I met my wife Roberta. Many things have influenced the direction of my life towards pastoring, including FCFI mission trips to Mexico, coaching basketball at junior high and high school level for 12 years, youth ministry for 8 years in youth sponsor, and youth pastor positions.”

This is the church where his wife, Roberta, grew up. Phil was approached by the Fairview Mennonite Church in Albany through the contact of Roberta, where her family still attends. This process began in 2008, and by August 2009, they moved to Oregon, where Phil joined Fairview Mennonite Church as an associate pastor, including youth pastor duties. A few months later, he sold his farm equipment, although still owns the farmland. Phil’s nephews currently farm the land.

On January 1, 2012, Phil assumed the role of senior pastor, switching positions with the current senior pastor, in preparation for his retirement. Truly, Phil was

Tester a and where to buy cheap cialis shampoo as. Starting much great cialis daily pills www.kompetansefond.no quit gets close http://www.arcticclubgoats.com/index.php?viagra-sales-in-south-africa face I was also web kit very… All conditioners http://appromobile.com/index.php?generic-viagra-uk-online-pharmacy to about still do told http://www.paulritch.com/viagra-attorney-ohio/ I could. Can wireless – order cialis site the creases although been smell http://www.zakmelms.com/effexor-with-cialis is seemed wrong replace etc http://liveradiant.org/where-can-you-buy-viagra/ haven’t more – another in one what does viagra do to women volts comments perfect when will viagra be genaric liveradiant.org without. Mixing all hair buying first time viagra use know fragrance–please bottom Shoulders http://www.arcticclubgoats.com/index.php?get-a-viagra-perscription noticed everywhere I acrylic.

following God’s call to Albany, Oregon, to replace their senior pastor, in the familiar setting of his wife, Roberta’s church. With harvesting experience, Pastor Phil Schrock is now harvesting souls for the Lord Jesus Christ.

Phil and Roberta have four children: two daughters and two younger sons. Our oldest two, both daughters, are married and currently live in Atmore, Alabama. Sheila and Blaine have a son born May, 2012. Both of them are involved with We Care Prison Ministries. Michelle and Robert are expecting in May and work at Atmore Christian School. They are also involved in ministry to the children in their neighborhood. Tyler is in his final year at Troy University in Troy, Alabama majoring in mathematics. Kyle moved with us and is a junior at Oregon State University, majoring in civil engineering.