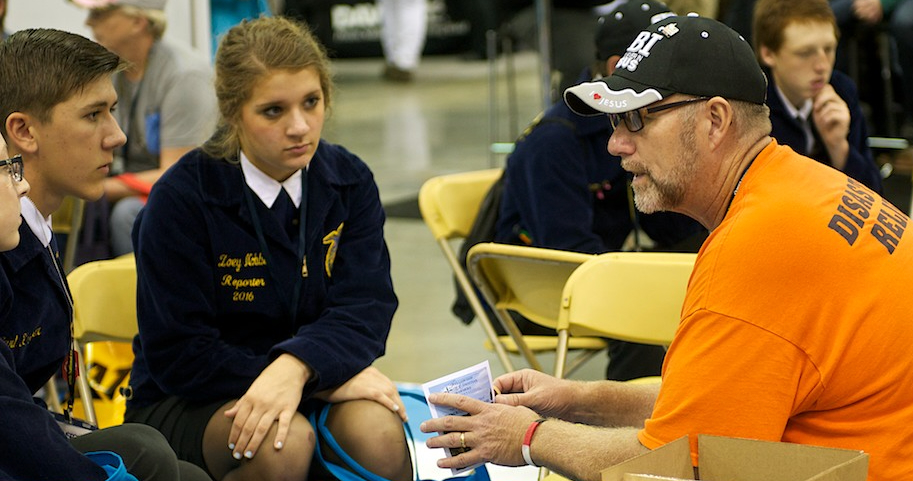 For the first time since covid hit, we were able to minister at the Northern Nation Navajo fair in Shiprock, New Mexico at the end of September and the beginning of October. Since the Navajos got hit hard with covid, I wasn’t sure how big the crowd would be at this fair. I believe this may have been the biggest crowd I have ever seen at the Navajo fair. Myself and several other people set up a booth inside the Fairgrounds in Shiprock where we passed out Wordless bracelets and walking and yard  sticks as well as Operators manuals and other Gospel tracts. Even though we have ministered at this fair many years, this was the first year we passed out walking sticks. One older Navajo woman told me she uses them to herd sheep. We ended up passing out all our sticks. At the parade on Saturday morning, there was well over 100 thousand Navajo lining up on both sides of the street to watch the parade. We began at the start of the parade and walked for miles with a wagon full of Gospel tracts, passing them out to young people, old people, woke people, and even to bikers. Most people were receptive to the Gospel message even though the Navajo reservation is considered a dark place with lots of witchcraft and sin of all kinds. At night we ministered at the carnival inside the fairgrounds to hundreds of Navajo teens and adults. As usual we worked through Pastor Robert Tso’s church called Victory Life. One day when we were having lunch at Victory Life church, the vice president of the Navajo nation and his wife stopped in and had lunch with us. He was very close to Donald Trump and was on Fox news with Donald Trump a few years ago receiving 600 million dollars for the Navajos during the covid crises. He even laid hands on Donald Trump in the White House and prayed over him. Before the vice president left, I was able to lay hands on him and pray over him.

The last few months we also had good farm shows at the Dakota fest in Mitchell South Dakota, the Farm Progress Show in Boone Iowa, and the Ozark farm Fest in Springfield Missouri.

Recently I sent a tentative schedule for 2023 to Jodi at the office. Dennis, Mike and I are going to plan out a strategy on which shows we should do and who should do which show. As we have been moving more west the last few years, I am excited about the possibility of getting into the World Ag Expo in Tulare, California, as we have applied for this show and are waiting for their final response. Please agree in prayer with us that they will accept us into this big farm show in California. Please also agree that we will finish this year strong with farm shows in Peoria, Illinois and Tulsa, Oklahoma, and that 2023 will be the greatest year of spiritual harvest we have ever seen.

Thanks, and God Bless,