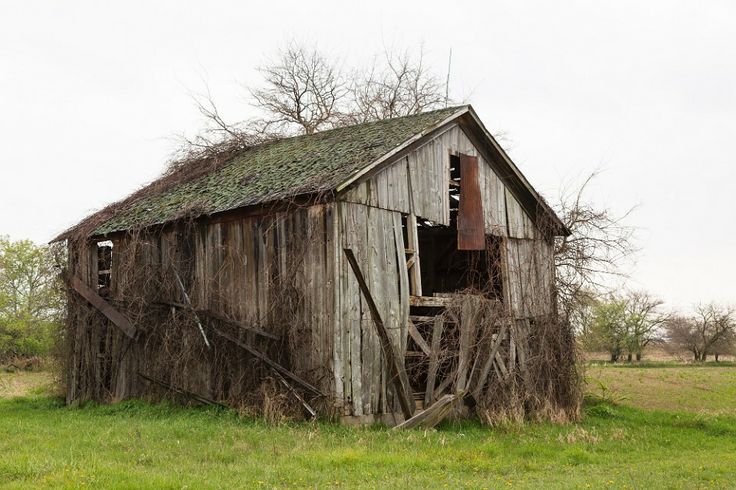 The countryside is dotted with old farmsteads that are just a skeleton of what they once were.  Aside from the house, most of the outbuildings are in disrepair and crumbling.  The people who live there now work in town and are gone most of the day.  It once was a place where clothes used to sway in the breeze while drying on the line, and huge gardens flourished under the summer sun, and cattle grazed in pastures nearby, and children played. But all that has changed.  What used to take a single farm family all spring and summer and fall to accomplish is now completed in just a day or two in each season by the big boys.

The trouble is what do you do with all the older buildings now sitting empty and dormant on these farmsteads?  Most of them are too small and impractical for use today and it is not cost effective to put a ton of money into them to keep them in good repair.  So they idly sit by and slowly decay and become an eyesore to the landscape.

We had a couple of those buildings on our place.  To fix them up would cost more than it would to replace them.  And, once they were fixed up, they had no practical use for much of anything.  Garden tools only take up so much space. It becomes an economic decision.  So last summer I decided to tear down an old building on our place that had been neglected for many years.  The roof had holes in it.  The wooden structure was rotten and dangerous.  Everytime the wind picked up, shingles blew off. I decided it needed to go.

An old farmer once said to me:  “Why pay someone to do something you can do yourself?”  It’s funny how those old sayings stick with a person. Although I had never demolished an old building myself, I decided to give it a go.  Heeding the old farmer’s advice, I borrowed a piece of heavy construction equipment from the neighbor and pushed my old building to the ground and crushed it into little pieces and made it into a nice, tidy pile of splintered lumber and set it on fire.  It burned up nicely.  After the fire had died down I hauled away the debris.  I then asked the aforementioned neighbor to break up the concrete on the foundation into sizeable pieces I could haul away in my small, borrowed dump truck.  He gladly obliged. It took about ten loads but I got it all cleaned up and dumped in a ditch far away.

This summer, there was another building on the list, so I repeated the above logic and did the work myself, mostly in the same fashion.  After I took the heavy equipment back, and was finishing the cleanup, I noticed there were a few pieces of concrete I had missed.  Although they were very heavy and took me to the far limits of what I could lift by hand, I was able to load them into my pickup and still keep my back in tack.  Sometimes I think I haven’t hurt my back, when actually I have.  This time was not one of those times.  As I drove down the lane to deposit the last few rocks on the rock pile, I was feeling pretty good about the whole situation. 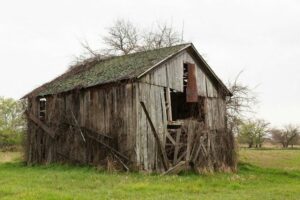 One of my goals when doing this type of work is, obviously, not to hurt myself in the process.  Regardless, nine times out of ten, I hurt myself in the process.  I either get scratched or cut, or bruised, or something. It rarely goes as planned.  However, on this occasion none of those things had happened. My plan came together and worked like a well-oiled machine… until I was down to the last two heavy stones.  That is when my whole plan went awry.  All I had to do was slide them off the back of the truck and roll them to the bottom of the pile.  Somehow, and I’m not sure how, one of the rocks shifted while I was moving them around, and slid off the top of another rock and landed directly on my big toe.  I do not wear steel toed shoes. The pain was instant and intense but I finished the job and went home.  Once at home I carefully removed my shoe and sock and took a look at the damage.  This is not the first time I have suffered from this type of injury.  I kind of knew what to expect but it was too early to know the extent of the injury. That night I did not sleep much due to the shooting, throbbing pain that comes with a smashed extremity.  By morning, my toenail was black and my whole foot was purple.  This was going to be a slow-healing process.

On the upside, I did the job myself, saving thousands of dollars.  I got rid of an eyesore and thanks to God’s beautiful design of the human body, I will heal.  Next time I will be more careful, but that will not guarantee something like this won’t happen again – seems it always does.

Lesson learned – everything comes at a cost.  Salvation may be free, but it is not cheap.  Revelation 22:17:  “Let the one who is thirsty come; let the one who wishes take the water of life without cost.”